No Thanks
Turquoise Coast, Turkey 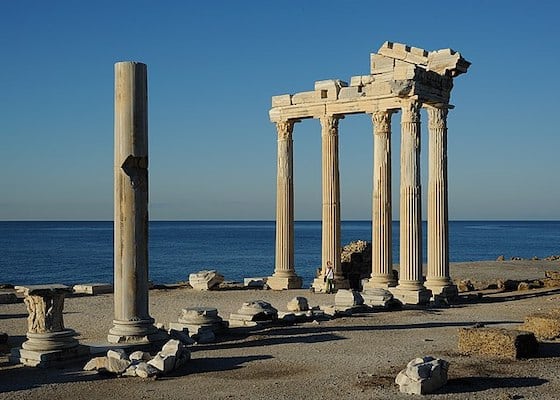 Between Alanya and Antalya lies the lovely beach resort town of Side, an ancient port city known for long beaches and Greco-Roman ruins. Side has a terrific series of waterfront promenades for running. The south end starts just south of town at the Apollon Temple near the Ancient City. Continue north along the waterfront for up to 8.7 km to Side Halk Beach near Kamelya World, an area of upscale shops & hotels. Great water views and a festive scene.

There are a couple of options here. The south part of the path runs for 4.3 km between the Ancient City and Kumköy Beach. Then there’s a 2 km section where you have to run on the beach (it’s wide and fairly runnable). The promenade picks up again just across the pedestrian bridge at the Strandbar Luna Blanca Resort, and continues for another 2.2 km to Halk Beach.

Note on Beach Running!  Side Halk Beach is among the best beaches for running on the Turkish Riviera. Wide and flat, with some nice firm sand near the water. Nearly 5 km long!