The Walls of Volterra ‘Runseeing’ Tour 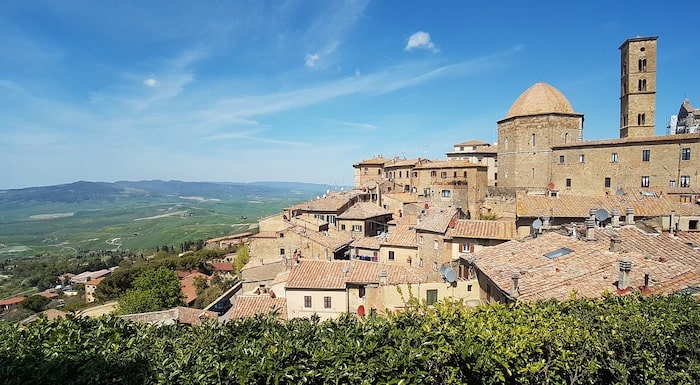 This is a ‘runseeing’ tour of the walled city of Volterra. You’ll run along the city walls, through several ancient gates, and see numerous archeological sites.  The map looks complicated, but the route is relatively easy to follow. Go early to beat the crowds. Note: Porta = Gate.

Start in the heart of Volterra at the Tourist Office at the large Piazza dei Priori square. Run west on Via Antonio Gramsci, the main road outside the city walls, to the viewpoint at Porta a Selci. Then head back to the city along the pedestrian V. del Castello, to the Archeological Park, where you’ll do a ~1 km loop, exiting to the Punto Panoramico viewpoint at the west end. Next, run through Porta all’Arco, then on the path through Pratini Park, and then on V. Lino to the Porta Felice. The next section is back east along V. Franco Porretti, on the outside of the walls, to see the Roman Theater. Run through Porta Florentine into Bastione Park to Porta Docciola, and then back into the city on the spectacular V. Lungo, along the wall with views of the Roman Theater.

Path of the Reclaimed Land (Arezzo-Siena-Umbria)

This ancient 62 km trail along the Canale Maestro della Chiana is an ideal cycling and running... more...

Several great routes in Florence: two historic 'runseeing' toutes, a run up to the Piazzale Michelangelo, the... more...