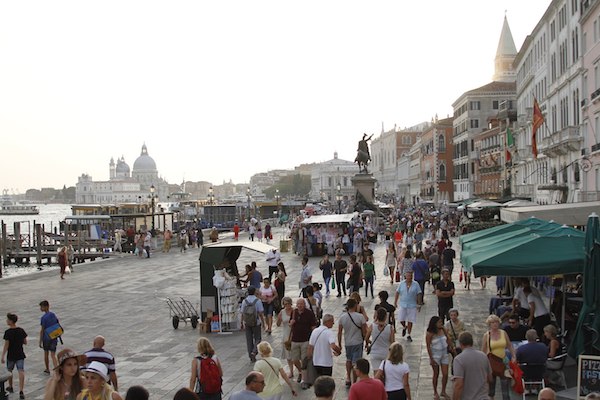 This is a wonderful along route along the water, easily accessible from San Marco. There are three sections: a spectacular waterfront jaunt along the Riva dei Schiavoni, a tour of the Giardini (biennial gardens), and an optional add-on in the Sant’ Elena, which altogether make for a tour of about 6 km.

Our route starts at the gothic Palazzo Ducale (Doge’s Palace), although if you’re up early you might start with loop or two around St. Mark’s Square. Run west along the Riva dei Schiavoni for 1.5 km (it changes names several times along the way). There are wide paths here, so it’s runnable even when crowded. There are water views to one side, lots of people, shops and restaurants. You’ll pass the Victor Emmanuel II Monument, Church of the Pietà, and the Naval History Museum. Enter the grounds of the Giardini della Biennale, public gardens hosting art exhibitions & featuring national pavilions built by famous architects. Continue along the water for another 1k. 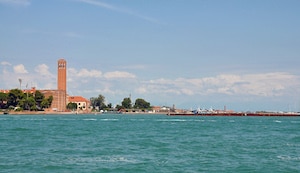 For another 1 km, you can run into Sant’ Elena, a quieter area with pleasant paths and trees. Pass the Church and run out on the pier at the boat club for a great view of the Lido. You can retrace your steps, but vary the route a bit by enjoying some of the paths in the Giardini, (use Viale IV Novembre), or sticking along the water, depending on the crowds.

Add-On: For a great 1.5 km add-on (especially during quieter times), do a tour of San Pietro. From the eastern end of the Giardini, take Viale Giuseppe Garibaldi to the monument, then RIGHT on Fondamenta Sant’Anna over to San Pietro to view the Basilica and Gardens. Cross the lagoon on Calle Larga Rosa, then LEFT on Salizada Streta to Fondamenta Sant’Anna and then Via Giuseppe Garibaldi for the return.