No Thanks
Albany, NY 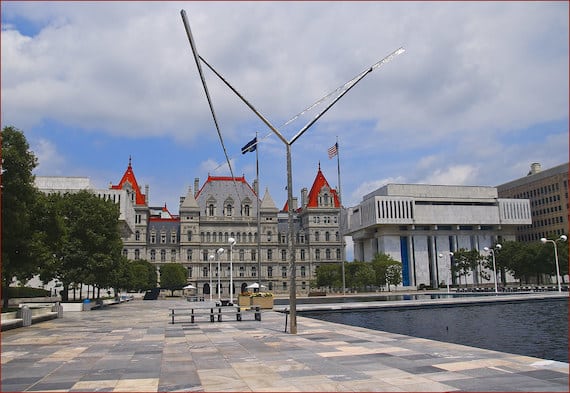 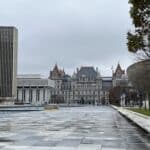 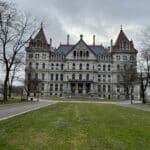 Our 10k ‘runseeing’ tour of Albany takes in a nice variety, while capturing some of Albany’s important and historical highlights. Our loop includes the Capitol, Empire State Plaza, two parks, and a section of the waterfront. The route can be modified for longer or shorter.

Start near the Capitol at The Egg, and head west through East and West Capitol Parks,  with nice views of the Capitol and other historic state buildings. There’s a kiosk with a map of the area/ The next section is a ~ 1 mile loop of Washington Park, which features paths around a lake, sports fields, playgrounds, gardens & statues. Exiting the park, use Elm St. to head south to Lincoln Park, which has some fields and a public pool. Take Museum Rd. to head back to the Empire Plaza area, which is a must-see for what works and what doesn’t in urban planning. It was built over a period of 10 years for a cost of $2 billion. The next section is an optional ~1 mile waterfront jaunt. Take the the Hudson River Way pedestrian path off of Broadway to get to the water, with views to the D & H Building, a 6-section Gothic & Dutch-style former railway company building with a 13-story tower. At Jennings Landing, enjoy a waterfront path around the Corning City Preserve, then make your way back to the start.

Shorter Options: Can eliminate the Lincoln Park or the waterfront loop (each saves ~ 1 mile).

Longer Option: At Jennings Landing, can continue on paved Mohawk Hudson Hike Bike Trail north for up to 5 miles.

A good opportunity for a longer off-road run in the Albany area. The multi-use path follows the... more...