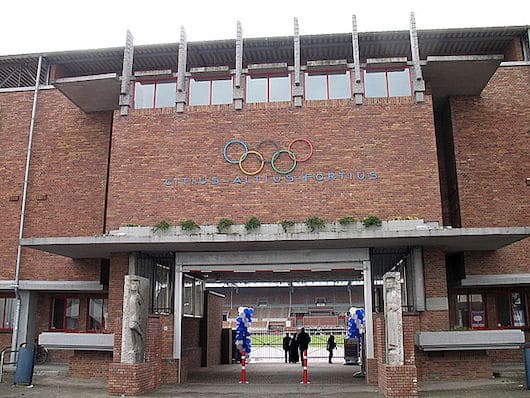 This is an enjoyable 10k run in the southern part of Amsterdam, combining the site of the 1928 Olympics, two lovely parks, and some canal-side paths. We start at Olympic Stadium Amsterdam, a still used site from the 1928 Summer Games. Run the perimeter path or sneak into the track! Next, enjoy a 1 km loop of the waterside Park Schinkeleilanden, which has some nice paths along a canal. Exit onto a canal-side path (Afroditeakde), and run east for 1 km to Sportpark Olympia Square, which has fields and recreational facilities. Continue east, sticking to roads close to the canal, to Beatrixpark, a lovely 1930s era park featuring landscaped paths. It’s ~2 km around the park’s paths. Return to the start using paths along the Amstelkannal.

As an add-on or alternative, you can connect from Park Schinkeleilanden to 4 km of paths along Nieuwe Meer (Lake), in Tuinpark & Park de Oeverlanden.  MAP