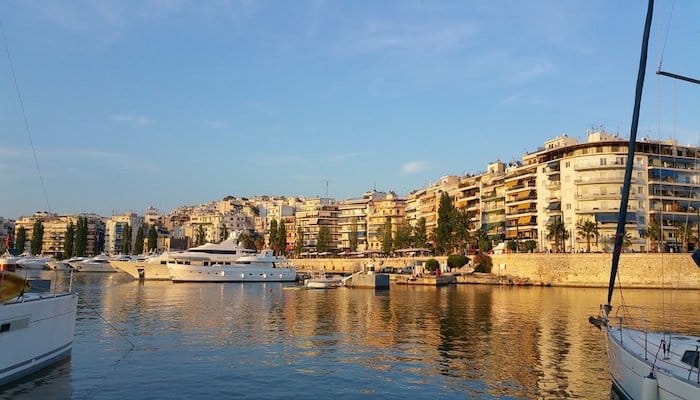 The port city of Piraeus is located just 8 km southwest of Athens. It’s a popular day trip destination from the city and one of the largest passenger ports in the world, servicing nearly 20 million passengers annually. There are a handful of running routes in Piraeus, primarily located along the Saronic Gulf coast. We’ve outlined options in the Main Port, along the Akti Themistokleous road to Marina Zeas, and around the Naftikis Paradosis and Stavros Niarchos parks surrounding the Athens Marina. We’ve also included a tour of the beautiful Kastella neighborhood.

Piraeus Main Port: Draw on the energy of Europe’s largest passenger port with this route around the slips and ships of Piraeus. There are pedestrian lanes (painted in red) along the whole of the port. The area has a somewhat industrial feel, with lots of transportation traffic, but there are good views of the passenger ships coming and going. The most popular starting point is the port’s western peninsula, near the Floating Museum “Hellas Liberty” and the Silo mural. Head north along the water. You’ll catch glimpses of the Eetionian Gate of the Piraeus Ancient Walls on your left, across the highway. At the corner of the Greek Orthodox Church, continue to your right and bend around the port. Between Port Gate E8 and E9, you’ll see Themistokleous Square and the Saint Spyridon Church across the street. The path continues southwest to the St Nicholas Church of Piraeus. Here, runners can turn around for a 7.5 km out and back, or continue towards our Akti Themistokleous route. ROUTE MAP.

Akti Themistokleous Waterfront to Marina Zeas: This route, which is mainly along Akti Themistokleous, can be run on its own or as a continuation of the Piraeus Port tour. It’s significantly more scenic, following a lamplit concrete promenade along a stretch of rocky coastline. Near the Hellenic Maritime Museum, the path bends briefly inland, then follows along the harborfront of Marina Zeas. Pick up the path at the corner of Akti Themistokleous and Alexandros Zaimi, then turn around at the Monument to the Pontic Greek Genocide for an out and back of 9 km. Shorten the run by beginning closer to Marina Zeas. ROUTE MAP.

Palaio Faliro Park/Stavros Niarchos Park/Athens Marina: Yet another waterfront run, this route roughly follows the course of the 15k Vartzakeios Run. It begins at the Athens Marina near Theater Dolphinarium Menandreio, then continues east along the water, highlighting Stavros Niarchos and Palaio Faliro Parks. Stavros Niarchos Park boasts a cultural center, library, and theater, while Palaio Faliro Park rests alongside the Flisvos Marina and Museum Ship Averof. This scenic route totals 12 km out and back, although runners can continue south along Leof. Poseidonos for many more miles into Glyfada (see our Athens Seaside Routes). Kastella is also a good add-on. ROUTE MAP.

Kastella: The Kastella neighborhood is perched high above the Athens basin, with great views of the coast below and the Athens Acropolis above. This affluent part of the city is known for its neoclassical architecture and landmarks such as the Veakio Theater and Church of the Profitis Ilias. Runners will find this is both great area to see the sights, and a killer hill workout in a city of otherwise flat running routes. We’ve mapped a quick, hilly 2.5 km loop, starting near the Faros marina. Run it on its own or combine with the Marina Zeas route for more mileage. ROUTE MAP.

Wonderful seaside route. Best section is the 5+ km from the Flisvos Marina north to the Peace... more...