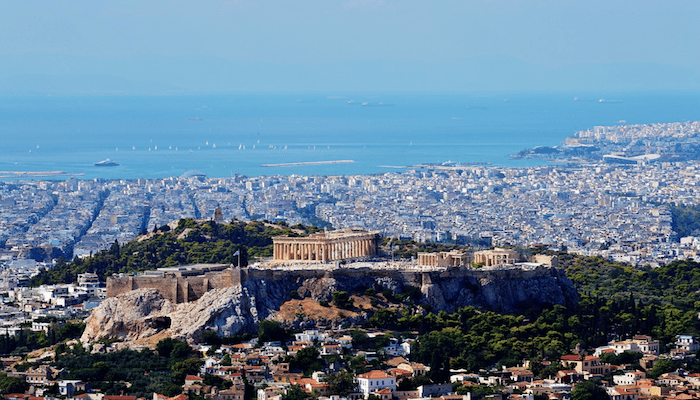 Athens, the ‘city of intellect’, is the capital of Greece is considered the  country’s intellectual and artistic centre, a ‘jewel’ of the ancient world. It’s a popular visitor destination. Although the city can be hot, crowded, and traffic-filled, there is some excellent running in Athens, combining its famous sites and hilly terrain. Note: If you’d like to have a guided running experience in Athens, we highly recommend our affiliate partner Go! Running Tours.

It’s great to start with our ‘runseeing’ tour of some of the city’s historic highlights. Other great places to run in Athens include several wonderful parks, Mount Lycabettus, and trails around the Acropolis. Just outside the city, we love running at the the Syngrou Estate. Trail runners will love Ymittos Mountain. Just south of Athens, there’s wonderful seaside running in Faliro and Piraeus. Many of our routes incorporate Athens’ historic and archaeological sites. And those who like running hills will find great options in Athens!

NOTES: this is a crowded city, with lots of traffic. Running on some of main roads might be challenging or not that pleasant, so seek out some of the routes we’ve pointed out. Also, remember that Athens is hilly…and HOT in the summer. Athens hosted the 2004 Olympic Games, which led to major changes in the infrastructure: a new international airport, new metro lines and a regional highway were constructed, and millions of indigenous trees and shrubs were added to the region.

Note: Many thanks to RunninGreece for their help with this guide! We encourage you to enjoy one of their wonderful running tours.

Some of our favorite runs in Athens, Greece

Parks | Arboretum/Botanical Garden
A green oasis in the heart of Athens. 2-3 miles of trails, passing several historic sites. Add-on by running the dirt track around the "Old Olympic Stadium".
Explore 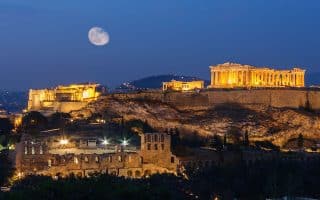 Great Views | Hilly | Historic / Tourist
A great area for running in Athens. Combine the pedestrian-only streets that line the base of the Acropolis, and then head up the hill. Can be combined with Philopappou Hill, which has 2-3 miles of paths.
Explore 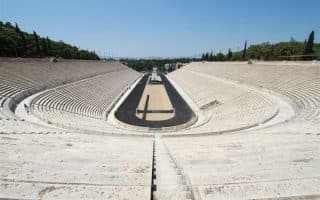 Historic / Tourist | Olympic Sites
The stadium dates back to the 4th century BC and was the site of the first 'modern' Olympic Games in 1896. It's a treat to run on the dirt track inside the stadium, or up and down the marble stairs. Across from National Gardens.
Explore 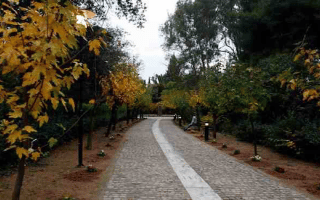 Parks
One of the largest public parks in Athens, offering 2-3 miles of routes. Ekklisia Agios Charalampos, or Greek Orthodox Church is at the eastern end of the park. Paths are concrete or stone, with some dirt options.
Explore 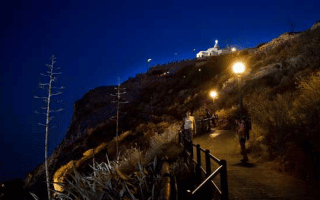 Great Views | Hilly
Mount Lycabettus is a distinct feature of Athens, rising 300 meters from the city. The best bet for most runners is the peripheral path around the hill, which is about 3km. One can also try the challenging ‘direct’ route up the hill.
Explore 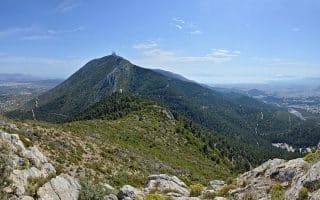 Hilly | Trail Running
A great hill or trail running 18 km east of Athens. There is paved road, and numerous trails of varying challenge and terrain. There are historic monasteries, impressive caves, and unsurfaced forest roads barred to traffic.
Explore 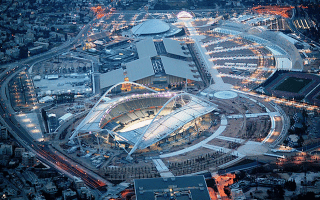 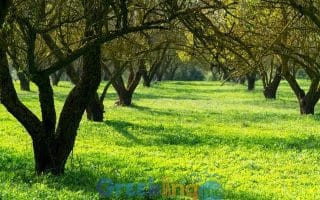 Parks | Trail Running | Blossoms & Blooms | Estates and Castles
This is a forest about 15 km northeast of Athens. There are 950 acres of trails, many of them wooded/shaded. One of the best green spaces within some proximity to Athens, and great for running.
Explore 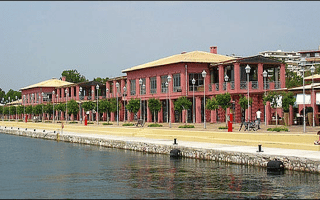 Along the Water | Multi-Use Trails | Routes With Videos | Seaside Promenades
Wonderful seaside route. Best section is the 5+ km from the Flisvos Marina north to the Peace and Friendship Stadium. South toward Glyfada and Voula there are some great sections plus a tram allowing for a one-way run. Video excerpts!
Explore 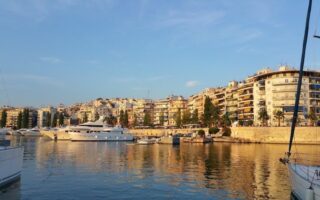 Along the Water | Gorgeous Residential | Great Views | Hilly | Historic / Tourist | Parks | Seaside Promenades
There are a handful of running routes in Piraeus, primarily located along the coast. We’ve outlined options in the port, marina, parks, and neighborhoods.
Explore 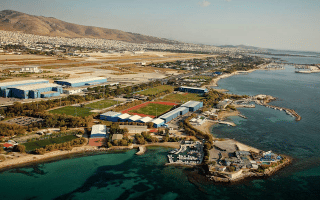 Along the Water
Host to sailing and several events in the Olympics, has been turned into sports complex with multiple activities and facilities. There's a ~3 km waterfront path for runners. Can connect to path headed ~10 km north to Flisvos.
Explore

The weather is generally mild. Summers are hot, but dry, with average high temps of 90F (32C) but can exceed 100F. There is not much rain during the summer months.  In the winter the average temperature is around 9 ̊C and the levels of humidity go up. The average sunlight hours are enough even in the winter, so overall, Athens is a suitable place for running in terms of weather.

Tip: The running experience is especially nice in April or May when the temperature is not extremely high and the nature is all bloomy. Athens is a popular tourist city, so there’s no shortage of hotels. Many are clustered in the area in between the National Gardens and the Acropolis. This area provides access to the best running around the major sites of Athens. There is another cluster of hotels near the 2004 OIympics venue, and in the Marousi area, which is where several universities, the KAT hospital, and corporate offices (such as Microsoft) are located.

There aren’t very many independent running stores in Athens. Best bets are the Nike store in the Syntagma Square shopping mall, and the Saucony store in the tony Kifisias neighborhood. Extreme Pro offers a range of sports equipment, including running gear. Pulse 100 is a dedicated running/cycling store, in the northern part of the city.

Another store is Adventure Gear, centrally located. They sell all sorts of outdoor clothing and equipment and one could buy shoes there.

RunninGreece offers guided running tours in Athens and other areas. They also host several weekly free group runs, including an open training every Saturday morning in the National Gardens.

Athens Half Marathon takes place the third weekend of March

Athens 10K takes place every November, one week after the Athens Marathon