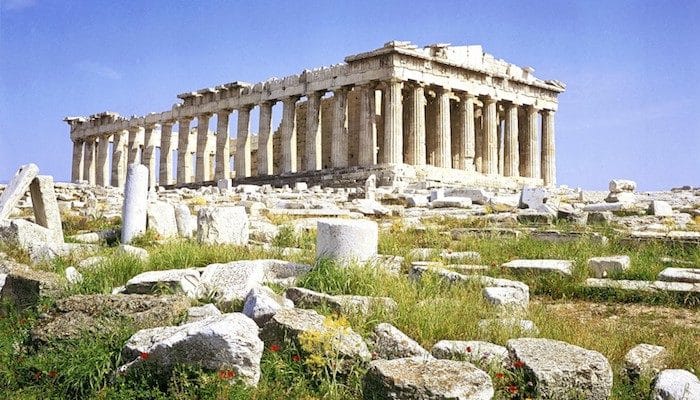 This is a ‘runseeing’ tour of some of Athens’ most historical sites. They are clustered within a fairly small radius, which makes it easy to see a lot within a 4-5 mile run. One can jump along any spot, but a good place to start is Syntagma Square, centrally located and on two metro lines. Start by doing ~1 mile in the National Gardens, passing by the Botanical Museum and the Zappeion, the stately hall built for the 1896 Olympic Games.

Exit the Gardens and head across the street to the Panathenaic Stadium, built in 4th century BC and made of huge granite blocks. It was refurbished for the original  1896 Olympic Games. With a 3€ ticket, go into the stadium and do a few laps around the famous dirt track (600 Greek feet, or 178m, compared to the conventional 400m) or up and down the marble stairs. Otherwise, head out the back of the stadium and run along Archimidous to the First Athens Cemetery. Then, side street up to Ardittou, which leads to an entrance to the paths that will take you by the Temple of Zeus, a aast temple begun in 6th century B.C., and the Arch of Hardian, a marble gateway with Corinthian columns is named for an ancient Roman emperor.

Head down toward the Athens Gate and run along the Dionysiou Areopagitou, the main pedestrian path at the base of the Acropolis. Option: to extend the run ~1.5 miles, run the wooded paths of Filopappou Hill. Sites here include the Socrates Prison and Theatro Doras Veras. Exit and run the Acropolis paths, with is many sites — Temple of Athena, Acropolis, Parthenon, Erechtion, and more.

The tour ends by exiting the Acropolis area, and passing the Choragic Monument of Lysicrates and Glebe Holy Sepulchre, to Flessa, making your way back to the National Gardens.

Add-On: Pay 3€ and run inside the Panathenaic Stadium.

Notes: This area can be crowded — best to go early to beat the crowds and heat. Also a good run at night, as most of the sites are lit. Also, several areas such as the National Gardens, Filopappou Hill, Acropolis area have multiple paths so choose whichever route you like!