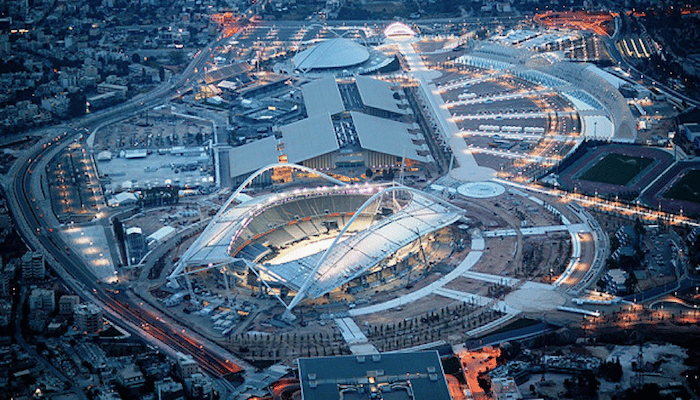 While Olympia is home to the original Olympic Games (and is a worthwhile destination to visit), Athens hosted the first modern day Olympics in 1896. We have a separate route for the Panathenaic Stadium.

This is a tour of the Olympic complex from the 2004 Games. The area is 10km northeast of the center of Athens, There is a decent run along the perimeter road, which is 3.8 km. Easiest place to start is the Eirini metro station. The best section of the road is the 2.8 km from the Golden Hall shopping center to Eirini, but it is possible to do the entire road. You’ll pass by the Aquatic Center, Velodrome, and the main Olympic Stadium, built in 1982, refurbished for the 2004 Games, and now home to the AEK F.C. soccer team.

You can also get off the perimeter road and put together a run inside the complex, around some of the lots and paths. Several of the Olympic venues have not been very well maintained.

Guided tours are available, where perhaps you can sneak a run around the track inside the stadium.