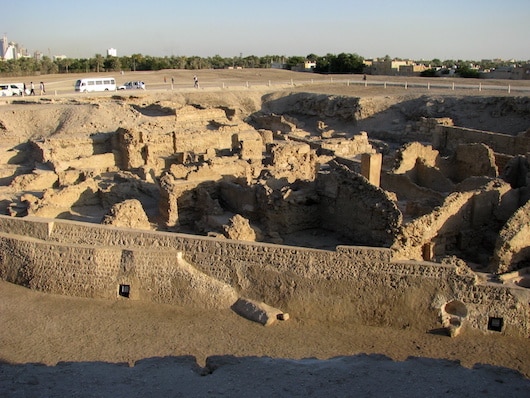 Note: The first 3KMs of this run are in a private property(Hotel) and it’s possible only guests are allowed access.

There’s some decent running in the Seef and Karbabad areas, which lie just west of Manama. In the Al Seef area, there are some nice roads/paths around the Jumeirah Royal Saray hotel and the Ritz Carlton out to the Mosque and a nice pier, making for a ~3 km loop. Then, it’s about 1 km over to Karbabad Beach, which is OK for running and has a small road through the middle of it for better footing. After 1 km along the beach, at the western end of the beach, at the Beach Rose Towers, continue on Qual’At Al Bahrain Ave. to the Bahrain Fort. The remains of this 16th-century Portuguese fort feature numerous paths around an archaeological site, and a worthwhile museum. Retrace your steps for a 9.3 km mile out and back.

Longer options: Continue east of Seef, to Reef Island, Bahrain Bay, and the Causeways. See our Manama route. Further west (but not a seamless run) is the Nurana Islands route.

Reef Island & Al Seef. Sections of Reef Island are still developing, but  3-4 km are possible, looping around the roads and paths. Then use Highway 68/Road 2849 for ~1 km to get over to the Al Seef District, where there are some nice roads/paths around the Jumeirah Royal Saray hotel and the Ritz Carlton, and even further to Karbabad Beach and the Bahrain Fort.

Just west of Manama, we recommend a 3 km loop of Seef around the Ritz Carlton area,... more...