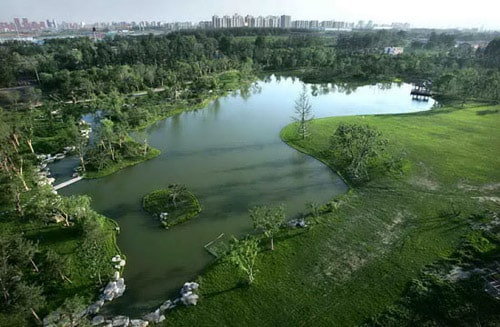 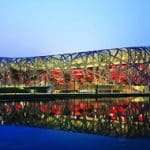 The Olympic Forest Park, built for the Olympics is a large, man-made nature park situated at the north end of the Olympic Green in Beijing. The park has two parts: the southern part is oval in shape and features lake Wa Biancun in the center, and the northern side, just outside 5th ring road has a mountain with excellent views of the city. Several small islands in the lake are linked by bridges. It is easily accessed by subway.

This is one of the best spots in Beijing for jogging, with many options within the park. There are many walking paths, and a jogging path with lengths of 3k, 5k, and 10k.  Length of run also depends on whether you are starting at the park or getting there from somewhere. There are restrooms and drinking fountains.

We’ve put together two routes here: One combines the best of the southern and northern parts of the park, incorporating two mountains, for an 11k loop. The other route focuses on main Olympic sites, which is clustered near 4th Ring Road, in the southern part of the park. This route includes the National Stadium, Olympic Village, and the China Science and Technology Museum. You can also do their marked paths

Located in the Haidan District in northwestern Beijing, the park has 3 lakes filled with lily pads,... more...