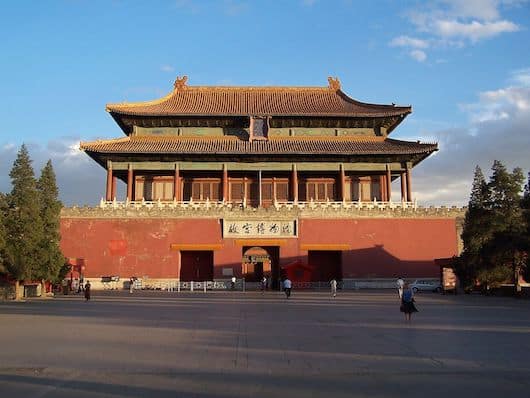 The Forbidden City/Tiananmen Square area is one of the most visited sites in the world. And it makes for an awe-inspiring run. The area is massive, and features numerous important sites. Anchored by Tiananmen gate, there is a large, open area around the Palace Museum, as well as several historic parks surrounding the area. One benefit of running in this area is that once inside the gate it is relatively car free. Still, it can be crowded — best to go early. And, be respectful of the this important and solemn site. Note: there are security gates to enter the Forbidden City, and there can be queues.

We’ve put together a route map that features a ~10k tour of the area, which can be used as a guideline to create your own custom route. We start at Tiananmen East station in Subway Line 1, and head to the Forbidden City via Zhongshan Park, passing through the Tiananmen gate and Duanmen, with the Imperial Ancestral Temple on the right. Run through the massive Palace Museum complex (and add with some of the side areas), and into Jingshan Park, located located on a hill & offering great views of the Forbidden City. Next, is a ~3 km loop of the 1,000 year-old imperial Beihai Park/Qiong Dao Island and Botanical Park, which is beautifully landscaped and features a section along a lake called Northern Sea. For the return, take Beichang St., or use the Palace Museum complex, then through Zhongshan Park.

There are good options to vary/extend the run in this area. Fuyou St. just to the west is good for running, and some of the residential district to the east and west of the Forbidden City are runnable.

Our thanks to Pekka Myllyla of runaroundasia.com for his help with this route!

Located in the Haidan District in northwestern Beijing, the park has 3 lakes filled with lily pads,... more...