No Thanks
Bergen, Norway 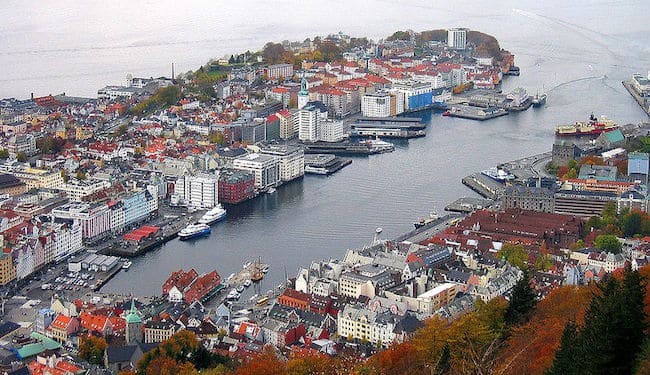 This is a very pretty ‘runseeing’ tour of the highlights of central Bergen, including some very nice waterfront sections. It is one of the longer runs one can do in Bergen without getting into the surrounding hills. We start at the Public Library, in front of a pretty park with a pond and water fountain, which is also home to numerous museums and concert hall. Take a quick jaunt around the lake, and through the park heading toward the Logen Theater and National Stage. Continue heading toward the Nordnes Peninsula on the water, using Klostergaten/Haugeveien, then onto waterfront paths on the western side, water on the left. There are wonderful views as you make it out to the Aquarium and around the trip of Nordnes. Come around the eastern side, passing the 17th-century Nykirken Church, and then enter Bryggen a medieval wharf in the historic harbour district known for its colourful, wooden-clad boat houses, making your way out to the Rosenkrantztårnet and Bergenhus, a 13th century tower & fortress. Return via Øvregaten and Kong Oscars Gate, passing the St. Mary’s Church and Korskirken Church.

There are numerous opportunities to vary the run by exploring the warren of streets in the center. You can also head west toward the University, the paths around Nygårdsparken, and around the Lungegaardsvann Lake.

A great introduction to some to some of the hills above Bergen, this wide, pedestrian-only path runs... more...