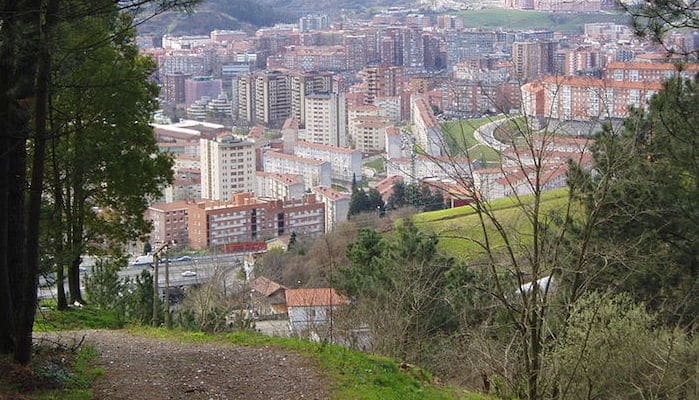 Bilbao’s greenbelt (or in this case, green ring) is a loop of some 44 km linking the city’s best urban and forest parks. It is also sometimes known as the “Gran Recorrido” or Grand Tour of Bilbao. While most runners aren’t likely to tackle the whole ring in a single workout, there are plenty of great options for long and short runs. The route is fairly well marked, but it uses roadways in between green spaces to connect the parks. However, the map clearly demonstrates the route, which adjoins the Artxanda, Monte Avril, Arnotegi, Pagasarri, and Arraiz areas. TRAIL MAP

Using the attached trail map, the main route is the Green Line.  Advocates of the Grand Tour have also mapped out routes to access the Ring from 10 points around the city (red line). Note:  the north part of the ring is closest to the city, the south end is more heavily forested (with lots of trails) and the east end is along a busy highway. Favorite sections:

Monte Avril (Iturritxualde Area): Bilbao is surrounded by several mountains, which offer stunning views across the city. One of the best spots to enjoy those vistas while running is Monte Avril, located on the greenbelt a bit northeast of city center. Here, runners will find a quiet gravel section of the path spanning along the ridgeline, with information boards along the way. It’s a good spot for some hillwork, but not too steep. Runners can access the park from the Santo Domingo Rest Stop in the east or the Artxanda Rest Stop in the west.

Pagasarri: The southern end of the Green Ring is a prime destination for trail runners. This lesser-travelled section of the loop winds through a sprawling expanse of parkland on mostly dirt paths. Runners should count on some fairly steep slopes, but it will be the views from the grassy summit of Mount Pagasarri that leave you breathless.

Artxanda: The Artxanda Lookout is not entirely on the route of the Grand Tour, but it’s a worthwhile detour from the nearby path. This park, located at the top of the Artxanda Funicular, consists of a series of circular paths with panoramic views of the city. Runners can start from the Guggenheim area downtown, cross the bridge, and use Alzerotabidea, Artxanda Igoera, and Enekuri Artxanda Errepedia to reach the lookout paths.