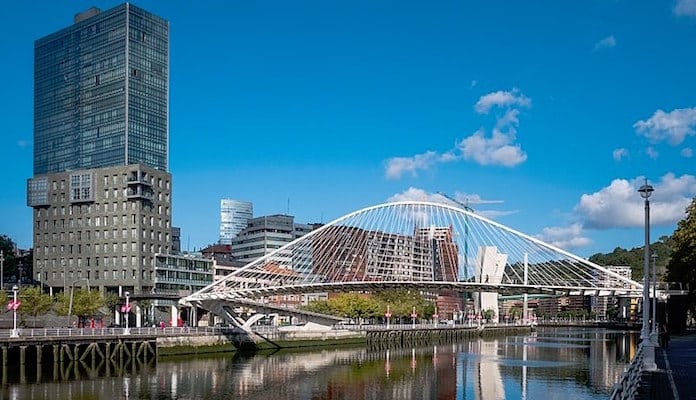 The top running option in Bilbao is the manicured promenade along the Estuary of Bilbao, the river rolling through downtown. There are paths on both sides of the estuary, which offer great views of the city skyline and some of the top architectural sites in Bilbao. The most convenient place to start, and arguably the nicest section, is the Parque República de Abando right downtown. Though some narrow sidewalks extend west from the park, the best running paths are to the east. On the south/west bank, the path goes about 3.4 km to the Puente de San Antón before it devolves into a simple sidewalk. On the north/east bank, the best section is approximately 3.7 km to the Puente de San Antón. Of course, the banks can be combined for a loop of about 8 km. This gives runners the chance to jog over the cool bike/pedestrian lane on the Euskalduna Zubia Bridge and see the “Streetlight Forest” surrounding Palacio Euskalduna. Can also peel off the estuary path and add sections of our Downtown Bilbao parks tour for a few additional km.

Longer Options: For a 13 km route, runners can loop through the downtown area, cross over the Euskalduna Zubia bridge, and run out to Zorrotza and back (Can run as an out and back or return along the wide sidewalk on N-634). Or, stick to the north side of the river and take the sidewalks west along the water to the hanging bridge in Portugalete. It’s about 23 km out and back. Option: Run one-way and take the subway back!