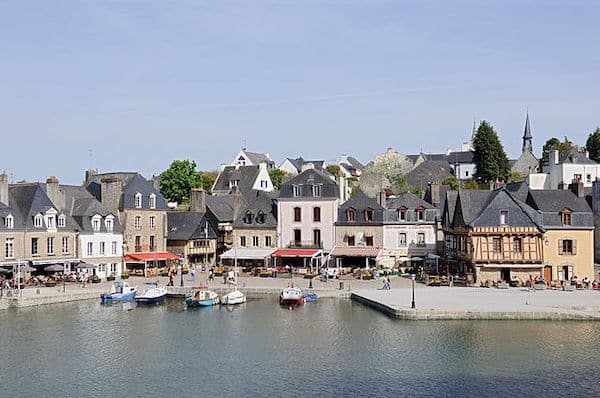 This is a nice run in Auray, a Brittany town located on the Auray River (Rivière d’Auray). The 5.4 km route incorporates quai-side promenade paths and a small loop around the historic center.

Start at the historic Pont de Saint-Goustan (bridge), which crosses over to the Port de St Goustan. The first 4.3 km are along the promenade paths along the river, featuring nice water views and colorful older buildings: 0.5 km along Quai Neuf on the southern side of the river, south along on Quai Franklin on the eastern side for 1 km, and then along the gravel-surfaced Quai Abbé Joseph Martin on the western side for 0.6 km. The final section is a hilly 1 km loop around the historic center, using Pl. de la République/Rue au Lai, where you’ll pass City Hall (Mairie) and the gorgeous Église Saint-Gildas.