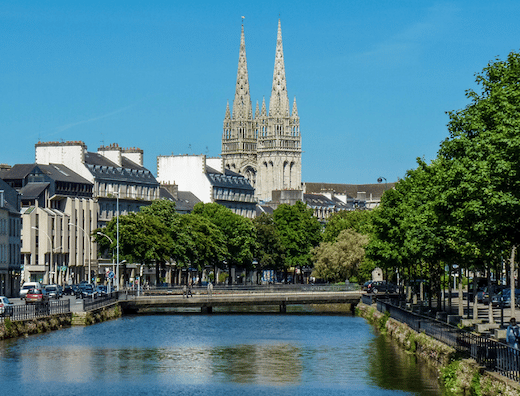 Quimper is a popular visitor destination in Brittany, known for its old town with half-timbered houses, the Gothic-style Quimper Cathedral, Breton museums, and faience pottery. The paths along the Odet River are the highlight of running in Quimper.  We’ve put together two routes which can be combined & mixed using the numerous bridges (pont=bridge).

West Bank. The path along the west bank is more developed. Starting at the wooden Pont Firmin, head south on the riverside paths for up to 4.5 km. There are great views of the water the whole way. It starts as a path alongside the Quai above the river, then turns into the dedicated Chem. du Halage, a gravel path alongside the river, ending at Corniguel.

East Bank & Prom. du Mont Frugy. This side has a bit more variety and is hillier. Also starting at Pont Firmin, head south along a more wooded path along the Odet River for ~2 km to the D875 highway. Past there, it’s another 1.8 km along wooded paths to the Parc et jardins du château de Lanniron — a nice botanical garden. For the return, we’ve included the option to run on the Prom. du Mont Frugy. As you’re heading back north, just past the Museum of Quimper Pottery, cross over to the Promenade, which is a wooded path above the river. Note: 60m climb for the Prom. Frugy section.