No Thanks
New York City - Boroughs 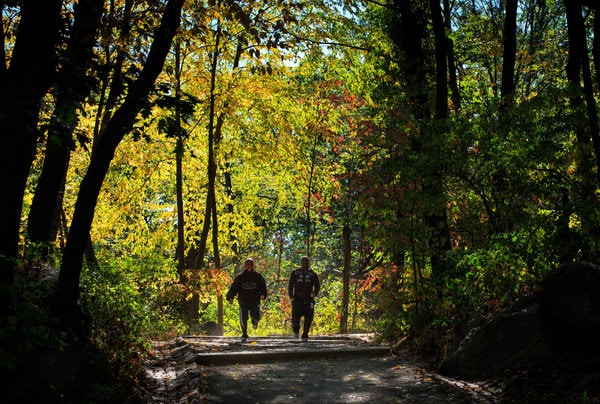 New York City’s fourth largest park, 1,146-acre Van Cortlandt Park has a variety of wonderful trails that allow visitors to access the park’s ridges, valleys, forests, wetlands, and lake. This park offers runners options including cross country courses, old aqueducts, and numerous trails. Access is via the 1 train to Van Cortlandt Park — 242nd St. or the 4 train to Woodlawn. Note that the waymarking isn’t great and the trail system can be a bit confusing. For a longer run, add Tibbetts Brook Park in Yonkers (just north), and the South County Trailway.

Putnam Greenway (1.7 miles): A new (opened in 2021), paved multi-use path that runs the length of Van Cortlandt Park. Really nice. It also serves as the Empire State Trail connection to the South County Trailway, which runs north of the park for several miles.  ROUTE MAP

Cross Country Running Course (3 & 6 miles) is a nationally renowned course. It begins on the Parade Ground, winds through Vault Hill, and forms a loop through the Northwest Forest.

Old Croton Aqueduct (mileage varies) runs through the center of the Croton Woods. This segment is part of the 41-mile-long aqueduct that brought water from the Croton Dam to New York City. Built in the 1830s as the city’s first extensive water supply, it was used until 1897 when the New Croton Aqueduct replaced it. An out and back run can be around 7 miles depending on when one turn back and which side trails are ventured onto. Besides the initial paved roads aligning the golf course, there’s a nice trail run with plenty of shade all the way to Tibbetts Brook Park.

Cass Gallagher Nature Trail (1.4 miles) serves the Northwest Forest. A short walk in from the intersection of Broadway and Mosholu Avenue, near the horse stables.

John Muir Trail (1.5 miles) is the park’s only east-west path. This trail traverses steep terrain at the park’s center. Enter either at Broadway and Mosholu Avenue or Van Cortlandt Park East and Oneida Avenue.

Your link to VCP is not working. Update it please!

Running cross country while in hs, van cortlandt park was a challenge and beautiful. Great memories!

Incorporating one New York’s iconic bridges is an integral part of the running experience in New York... more...

Sort of a mini Central Park, this is the best green space option for running in Brooklyn.... more...