No Thanks
Bruges, Belgium 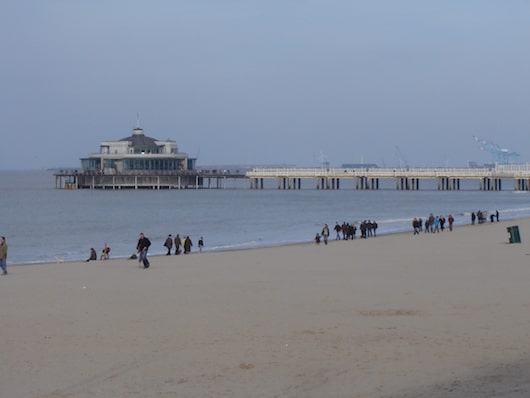 For a destination run, we recommend heading to the Flemish coast, about 13 km north of Bruges. In the port town of Zeeburg, and beach resort towns Blankenberge, De Haan, and Ostend, there are long beaches that are great for running, beach-side boardwalks (called Zeedjik), and paths through dunes. Rather than map out a specific route, below are some recommendations for the area. One bonus: a tram/light rail runs along the main road in these towns, so it’s possible to run one-way and take transport back.

Boardwalks/Beachside Paths: Zeeburg to De Haan. In Zeeburg, the Zeedjik boardwalk runs along the beach for 0.8 km, just west of the N31. The Zeedjik boardwalk/path picks up again in Blankenberge, and runs along beach for 4 km, where it crosses an inlet. West of there, a path continues for another 2 km, but it’s more sandy and not along the beach (but still pleasant!). MAP Further west in De Hann there’s a good path that runs for 4.4 km to Fort Napoleon.  MAP

Boardwalks/Beachside Paths: Ostend. Just west of Fort Napoleon, a boardwalk/coastal path runs for 13 km (8.2 miles) along the beach. Starting at the Leopold Hotel, and heading west, you’ll reach the airport in 5 km, Raversyde (WWII Battery and Park) at 6.5 km. The prettiest part is the first 4 km…after that the coastal path is alongside the busier N34 road. Part of the path is a rubberized surface, gentle for running! The beach here is also great for running. MAP

Beach. The beach in this area is long, continuous, and generally quite runnable. It’s pretty wide and flat and features firm sand near the water at most times. One can start in Zeeburg and head west for many km, with a couple of beach breaks where there are inlets.

Parks and Dunes. There’s a nice park in Blankenberge, just off the N34, that is a tree-lined waterfront preserves and has ~2 km of paths that are pleasant for running. In De Haan, there are some beach dune paths that are good for running.

It is possible to run to this area from Bruges — it’s ~12 km, but it’s mainly along a bike path paralleling the N31, and not so scenic. Also, there’s good access to Ostend from Bruges on a train that only takes 15 minutes!

The 10.5 km Outer Canal Loop is the signature running route in Bruges, as it heads along... more...