Run The Widest Avenue in the World: Av. 9 de Julio 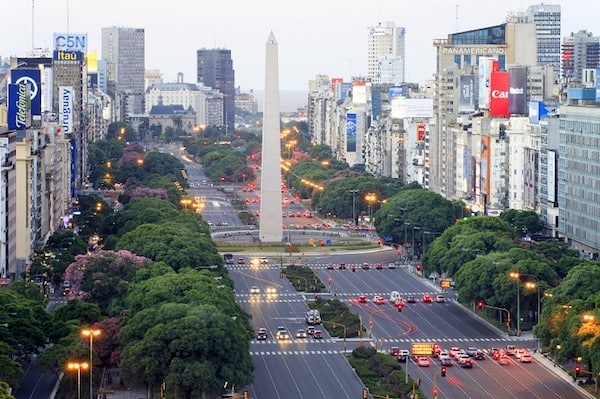 This might not be the most scenic run you’ve ever done, but if you want to run along the widest avenue in the world, it’s the Av. 9 de Julio in Buenos Aires. The avenue is  1 km west of the warerfront, and runs for 3.6 km from the Retiro district in the north to Constitución station in the south. The avenue has up to seven lanes in each direction and is flanked on either side by parallel streets of two lanes each. There are two wide medians between the side streets and the main road.

Fifteen lanes of cars and the Metrobus running alongside might not sound too bucolic for running, but there are wide sidewalks and sort of a bike path, making it pedestrian/runner friendly.

Landmarks along the way include the French Embassy, Teatro Colón, Oblelisk (and underground subway station/mall), Statue of Don Quixote, and Plaza Constitución in the south.

The route can be combined with others in the area, notably the pleasant 2 km from Plaza de Mayo to Plaza del Congreso.