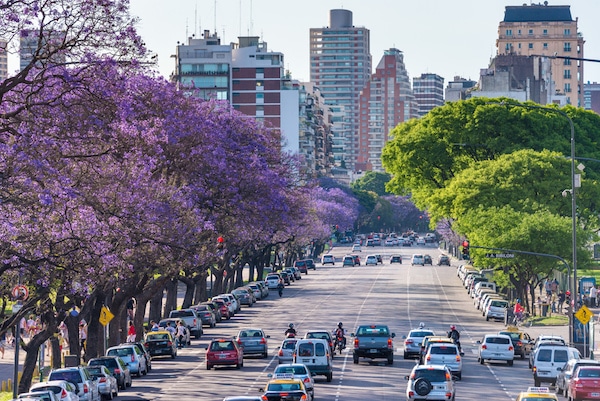 During the late nineteenth century, the city of Buenos Aires was experiencing rapid growth. After the opening of what is now known as Avenida del Libertador (also featured in this guide), the city needed a parallel road to cater to the upscale neighborhoods of the then undeveloped north side. From this necessity came Avenida Pres Figueroa Alcorta, one of Buenos Aires’ major thoroughfares at over 7km (4.3 miles) long. This is a busy road, but there are wide sidewalks and a bike path that make a run alongside and through several parks and plazas very worthwhile.

You can start anywhere, but the southern end of our route is near the Museo Nacional de Bellas Artes and the northern end is at the Estadio Monumental Antonio Vespucio Liberti. Our route travels up (or down) the road in its entirety, for 6.7 km (4.16 miles).  Highlights of this run include Plaza Armenia, the statue of Justo José de Urquiza, and Plaza Juan Facundo Quiroga. There is a sidewalk/bike path along much of the road.  Additional miles can be added to this run by exploring the many parks and plazas along the route. For variety, do a loop using Avenida del Libertador, which runs nearly parallel. Bus 130 runs along the road, allowing for options to shorten the route or do a one-way run.