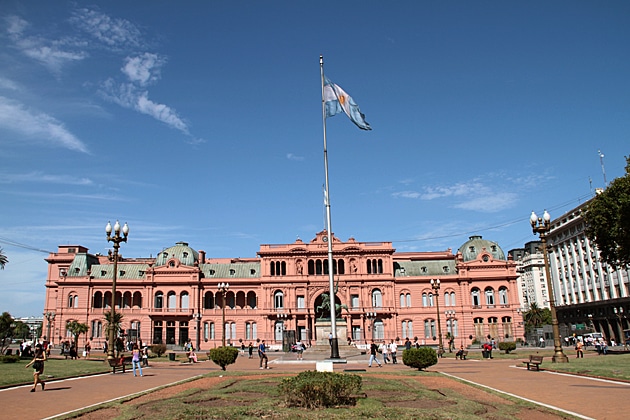 La Casa Rosada (The Pink House) is located in Buenos Aires’ Plaza Mayo, which as been the center of Argentina’s political institutions since the 1580 foundation of the city of Buenos Aires.  The house is the executive mansion and office of the President of Argentina and is known officially as the Casa de Gobierno (House of Government). However, due to its unique baby pink coloring, many people know the mansion as La Casa Rosada. We have two options for running in the Casa Rosada Area. Short Run- 5.3 km: Loop through the more busy parts of the city. Runners should be aware of their surroundings, and may need to cross some intersections during their route. All areas of this run include sidewalks, so runners will be out of the way of traffic. Thanks to Buenos Aires’ block system, runners can easily explore the streets located inside this loop.

The route also runs through Plaza San Martín, where runners can lengthen their trip by exploring the grounds which are decorated with more than 350 trees all of regional species. Sightseeing highlights at Plaza San Martín include El Monumento a los Caídos en Malvinas, El Monumento del Libertador Jose de San Martín, and Torre Monumental.

Longer Run: Add by running west to Plaza Del Congreso, an extra ~3,5 km there and back, using Avenida Rivadavia, and Avenida Hipólito Yrigoyen, which are pleasantly shaded and have good sidewalks.