No Thanks
Buffalo, NY 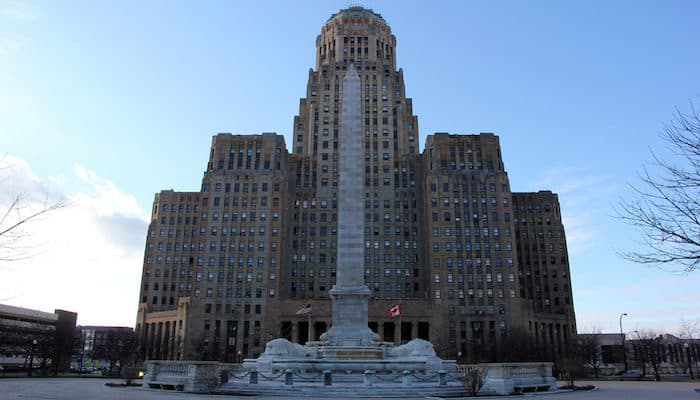 Buffalo’s downtown area has many notable features, including some fascinating older architecture. Starting at the Buffalo and Erie County Public Library, this 4.6 mile loop will tour you around downtown Buffalo, passing by some of the city’s most widely-known landmarks including Fountain Plaza, Buffalo City Hall, and the Lake Erie County Building. Other highlights include the Bisons baseball stadium, arenas, the Convention Center, Babeville and Waiting Room theaters, and the gothic St. Louis Church.

Fountain Plaza: Part of the 1980s restoration of Downtown Buffalo, Fountain Plaza is strategically located in the 500 block of Main Street, the city’s central business district. The plaza offers a free public ice rink, widely regarded as the perfect place for a fun activity during the cold winter months.

Buffalo City Hall: Known as an Art Deco masterpiece, Buffalo City Hall offers some of the most outstanding murals in its grand lobby. The City Hall’s observation deck is said to provide the best view in all of Buffalo.