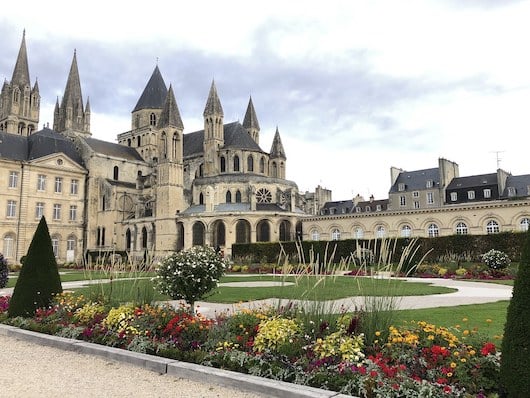 Caen is a port city just inland from the English Channel, known for its circa-1060 hilltop Castle flanked by two historic abbeys. We’ve put together three terrific running routes in Caen, which are adjacent and can be combined.

Caen ‘Runseeing’ Tour. This 10k route hits Caen’s historic highlights. Start at the Marina (Port de Plaisance), where you’ll run along the water and by the Alexis de Tocqueville library, then east along Rue Manissier to do a 1 km loop around the lovely grounds of the Abbaye aux Dames de Caen. Then, take the hill up to the Caen Castle. Run through the Castle/Fine Arts Museum grounds, and continue north through the the paths around Caen University Normandy. Then take Rue Père Sanson to do a loop on paths through two lovely parks: Les Coteaux des Sablons and Vallée des jardins, with its flower gardens & arboretum. Head south on R. Desmoueux, and RIGHT on Fossés St Julien, to a large square with the spectacular L’Abbaye-aux-Hommes, Mairie de Caen, and other historic buildings. For the return, take the main, mainly pedestrian-only R. Ecuyere/St. Pierer through the historic center of Caen, and RIGHT on Av. de Six Juin back to the marina.

Waterfront Running. There are two options that can be combined. Starting from the Marina, a nice path runs alongside the Orne River for 3.5 km. Or, run on the gravel path alongside the Canal de Caen a la Mer, the canal that heads northeast to the sea. It’s up to 15 km one-way, so choose your distance!  There are water views the whole way.
Share:
Essentials
Route Map: Runseeing Tour Route Map: Orne River path Route Map: Canal de Caen a la Mer