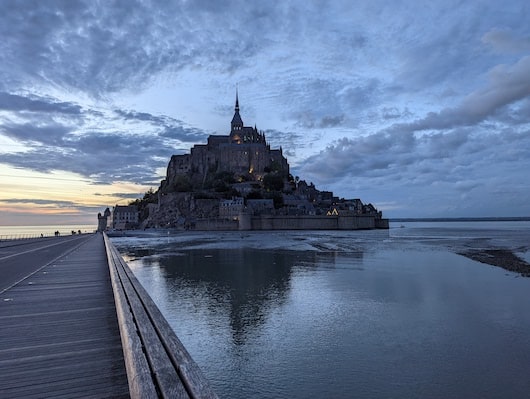 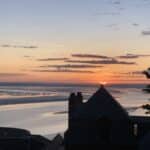 Running on the road/path that approaches Mont Saint-Michel is a memorable experience. Mont Saint-Michel is a tidal island off the coast, with its spectacular Abbey of Saint-Michel soaring 100 meters above the sea. From the Tourist Information Center/Parking lot, there’s a road with a separate pedestrian path approaching the Abbey with wonderful views of the Abbey and coastal plain (cars aren’t permitted on the road but there is a shuttle bus). The 2.7 km path approaching Mont Saint-Michel is beautiful, and it’s worth a long pause on the bridge to watch the tide roll in and out as the Mont transforms from a peninsula to an island, and back again. Our thanks to Mark Miller for his additional insights on this route and fab photos!

At the Abbey site itself, there’s a 200-meter pedestrian path and then 350 steps to the highest point of Mont Saint-Michel, but the street is steep with slick cobblestones, and very crowded unless you run early or late. Note: at low tide, it’s possible to walk/run on the beach on the south side of the Mont.

Add-Ons: From the tourist information center, a nice add-on is to head south on a pedestrian path along the narrow Couesnon River, which has nice views of the water and surrounding pastoral countryside. We’ve created a route that goes along the path for 3 km, taking a short detour to see the Moulin de Moidrey, a mill dating back to 1805. One can continue even further south for several km along the river path to Pontorson.

Pro Tip: At 6:45 there are ‘jours’ or ‘daily prayers’, where locals and tourists can go up the stairs and inside the chapel at its summit. There they join the monks and nuns as they start their day with a short service (30 minutes) with beautiful acapella singing of proverbs. A magical experience.