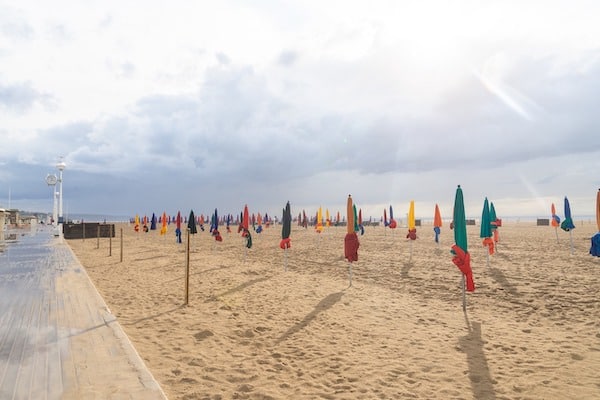 Deauville is an upscale seaside resort on the Côte Fleurie, known for its wide, sandy beach, casino, golf courses, and horse racing tracks. There’s some very scenic running in Deauville, centered on the seafront promenade and the marina, which can be done separately or combined for a 14 km route! Note the beach is also situationally runnable.

Seafront Promenade. The seafront promenade is one of the best places to run in Deauville. There are great views of the beach and the water along Les Planches, a 1920s boardwalk, and Prom. Michel d’Ornano. Including a jaunt out to the pier, it’s 6.2 km out and back. Can also run on the beach.

Marina Run. There are lovely paths around the marina at the Port-Deauville, which can be a separate route or combined with the seafront promenade. We’ve created an 8 km route, starting from Les Planches. Use the pedestrian bridge that crosses over to the path that runs alongside La Toques river, then over the D513 bridge (good sidewalk). Then, run on the west side path along the river toward the beach, and take a jaunt along the wooden promenade to the lighthouse. Then enjoy the 1 km Prom. des Planches. along Trouville Beach. Retrace your steps, adding a bit of a mix around the basin/marina.