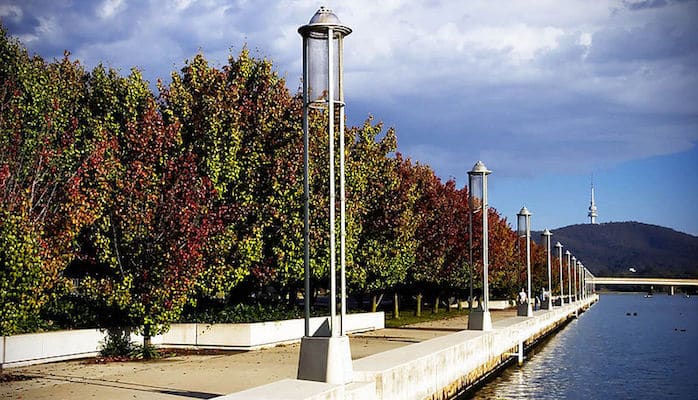 Without a doubt, the highlight of all running in Canberra is this route around Lake Burley Griffin, which hugs the coast through Commonwealth Park and traverses over the water via two bridges. It’s a refreshingly breezy route, with incredible views of the The National Carillon Tower, the lake’s signature geyser, and the architecturally fascinating Parliament House. In fact, the whole area surrounding the manmade lake is quite pleasing to the eye — it was designed by American architect Walter Burley Griffin, who won a competition to design the entire city center. There are a multitude of routes around the lake, but we like this circuit starting in Commonwealth Park — because who doesn’t love running over bridges? From the park, just off Parke’s Way, head west toward A 23. A footbridge will carry you over the center of the lake to Patrick White Terrace. Continue east along the waterfront until you reach the second bridge, which will drop you in Kings Park on the north side of the lake, where you can take a left and head back towards your point of origin.

If too much pavement pounding is jostling your joints, take your run to the Stromlo Forest Park... more...