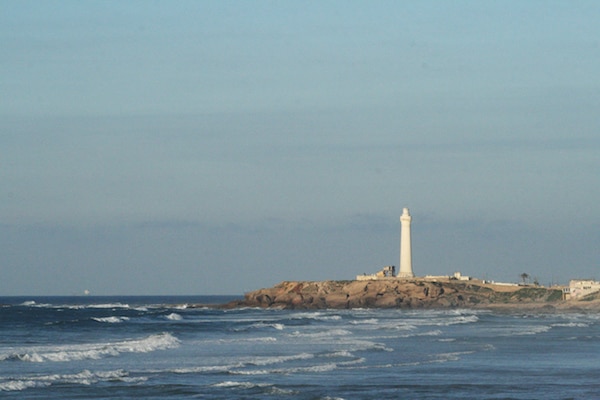 Those looking for a run in Casablanca usually head toward the water, where a series of roads and waterfront paths stretch along the Atlantic Ocean. It is possible to run on roads hugging the water for nearly 13 km, from the Casablanca Marina to the Morocco Mall, near Madame Choual Beach. Nearly all of this route is on either a road with wide sidewalk, or on a pedestrian path/boardwalk. There are also several beaches along the way — and they are quite runnable, wide and with firm sand near the water. Here’s an overview of the whole route, but choose any section you like!

Starting at the Casablanca Marina, head south along the waterfront road, and at the ~2 km mark, do a loop around the Hassan II Mosque, the third largest in the world (note: be respectful during prayer time). The next section is along Boulevarde de Corniche, for 3 km to the El Hank Lighthouse. Going down to the lighthouse adds about 1 km. You’re now in the heart of the Ain Diab waterfront area, where you can run for several km, passing the Lalla Meryem Beach, and high end hotels, the Tahiti Beach Club, and waterfront pools on “The Corniche“. At the 9 km mark, the road turns into Boulevard de l’Océan Atlantique, along Aïn Diab Beach (good beach running here too), and then the Morocco Mall, which has a nice, park with paths on the water side. Near the mall, take a quick jaunt out to the Sidi Abderrahman islet.