No Thanks
Chicago: Downtown & Central 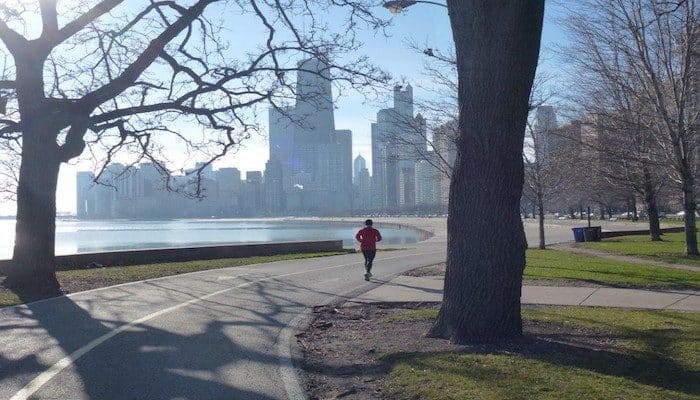 The 18-mile Lakefront Trail is one of the most spectacular urban runs in the country. This route has it all: gorgeous views of Lake Michigan and the Chicago skyline, urban beaches, marinas, and beautiful parks, passing by some of the city’s famous cultural institutions. In addition to the trail itself, there are several fantastic spots just off the trail that make for add-on running options or for variety in an ‘out and back’ run. Note also that metro stations are usually within a mile of the trail throughout its entire length, allowing for some creative one-way options!  Note that access from Lakeshore Dr. is at specific intersections, using underground tunnels and pedestrian bridges in some cases.  A recent project has improved the trail and there are now separate pedestrian and bicycle paths along most of the trail — with the pedestrian sections closest to the water!  Note also that much of the trail is lit at night.

We’ve included several links to trail maps and a table with some recommended loops. Below, we’ve divided the trail into three sections, with the northern terminus at Edgewater Beach being Mile 0 and headed south. If starting from the heart of downtown, say around Navy Pier, we generally prefer the heading south, toward Museum Campus and then south of there.

Middle/Downtown Section: Chicago St. at Navy Pier to McCormick Place Convention Center, Miles 7-11. Parallels the heart of downtown and the Magnificent Mile, and includes sights such as Navy Pier, Grant Park, the Museum Campus, and Soldier Field. Lots of great sights, but can be crowded on a nice day.  Particularly spectacular around the Museum Campus, where you should pop off the main trail and  do a spectacular loop around the tip to Adler Planetarium and even additional trails along Northerly Island Park. Additional Options: Loop around Navy Pier, Grant Park, additional trails around the Museum Campus, Northerly Island Park, & Soldier Field.