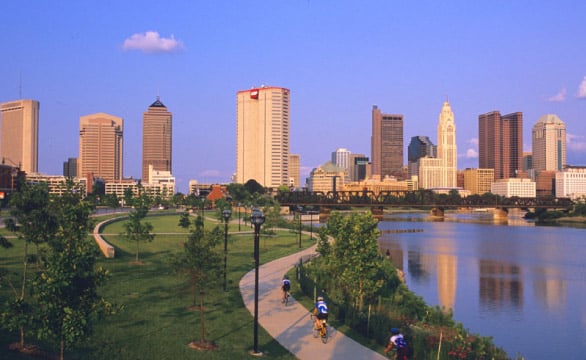 The Lower Scioto Greenway Trail is a very popular route among runners in Columbus. Known as the city’s first greenway trail, it travels along the downtown riverfront, connects some of the most popular neighborhoods in Columbus, and serves as the trailhead for several parks including Scioto Audubon, North Bank, Bicentennial, and Battelle. The trail is also widely known for serving as the spine of the famous Scioto Mile, a string of prominent parks, civic landmarks, and promenades. While the route specified here covers only 5.5 miles from east to west, the Lower Scioto Greenway Trail is over ten miles long. It intersects with the Olentangy Trail, which runs north-south. At the south edge of downtown, the path winds through Scioto Audubon Park, including a trailhead at the Audubon Nature Center. At the north edge of downtown, the trail directly connects to the Olentangy Trail, and continues north 4 miles to its current terminus at W. 5th Ave.

For variety, you can also run along a section of the trail on the western side of the river, which goes 1.8 miles from Dodge Park to N. Souder Ave.

Note that the trail tends to be plowed, especially between North Bank Park and the Rich Street Bridge, on both sides of the Scioto River.

Add-On: Grandview Heights neighborhood, just east of the northern end of the trail (use 5th Ave.)

One of the most popular bike paths in all of Ohio, the Olentangy Trail is located just... more...