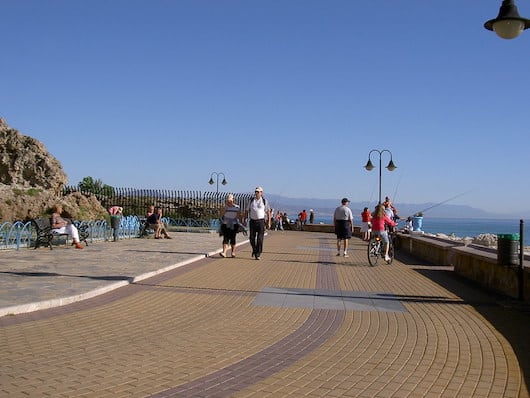 The westernmost point of the promenade is at Sunset Beach (near the watchtower). It’s 3 km east to Benalmádena, alongside the Playa Arroyo de la Miel (playa=beach). In Benalmádena, wind around the marina and continue east along the Costa de la Carihuela, passing Playa de la Carihuela, reaching Torremolinos just past the 6 km mark (3 km east of Benalmádena). From here, the Paseo Marítimo continues for another 4 km along a series of several continuous beaches. The eastern terminus is ~4 km west of the Misericordia promenade that runs from Málaga west to the Guadalhorce river. As for beach running in this area…the beaches are numerous and wide, but the sand tends to be soft except for right near the water.

The 25 km of seafront promenades accessible from Málaga are among the most popular places to run... more...

Several km of pleasant gravel paths along the Guadalhorce River just west of Málaga, which includes a... more...