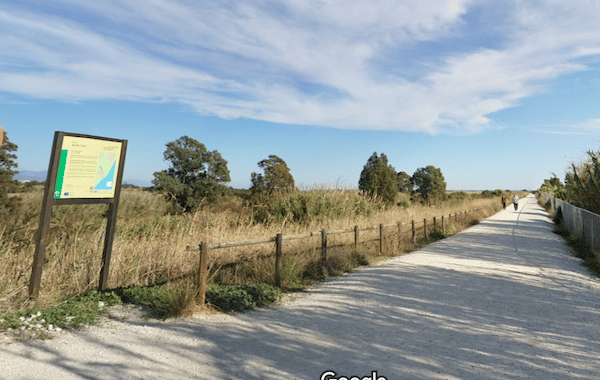 Just west of Málaga, there are some pleasant paths along the Guadalhorce River, which includes a section in the Parque del Guadalhorce, a scenic estuary popular for bird watching. The gravel trails run between Sacaba Beach, inland to near the airport. There are a few ‘sections’ on the east and west sides of the river, and paths around the estuary, which has several observation decks over the river and lagoons. The route can be started at the end of the Malaga Promenade in Sacaba Beach, or in Guadalmar.

It’s important to know the two places one can cross the river. To access the paths on the east side of the river from Sacaba Beach, there’s a pedestrian bridge just north of the beach off MA-22. To access the Parque del Guadalhorce, there’s a small pedestrian bridge in Guadalmar, just south of the MA-20 road. The MA-21 bridge is needed to cross from the Guadalmar side to the Sacaba Beach side. It’s ~2 km from the beach to the MA-21. One can easily put together ~10 km here, doing the various out and backs on the east and west sides of the river, including the crossings. There are also some paths north of the A-21, past the airport, for those who want a longer run. We’ve included a sample route, which can be used as a guideline.

The 25 km of seafront promenades accessible from Málaga are among the most popular places to run... more...

Fantastic running in this upscale area of the Costa del Sol. We've put together two routes that... more...