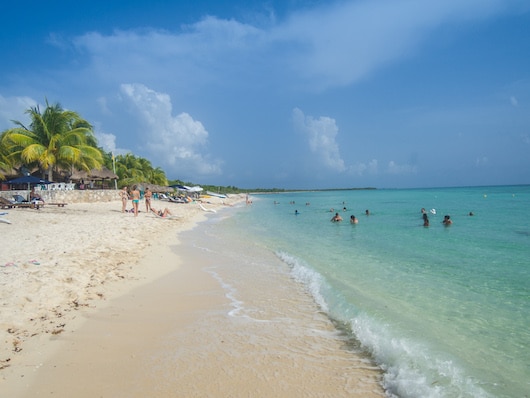 This resort island 12 miles east off the east coast of the Yucatán Peninsula is a popular visitor destination. It is also FABULOUS for running, owing to the 65 km cycle path that was built to replace the old highway and that circles the southern part of the island. There are several lengthy sections with wonderful ocean views. The path on the eastern side of the island is especially spectacular! Our guide to running on Cozumel breaks up the coastal road into three sections, with a focus on the nicest spots. Also included are some of our favorite beaches for running.

There’s some lovely beach running on Cozumel. The beaches aren’t that wide, but generally the sand is firm near the water. Note that tidal differences here are not significant. Note some of the beaches might have admissions restrictions or charge a fee. Our favorite areas for beach running:

It’s also possible to run around the town of San Miguel, where most of Cozumel’s 80,000 residents live. Many of the streets are narrow and don’t have sidewalks, but a leisurely DIY jog around town can be a ‘runseeing’ pleasure. Some of the nicest sections of the coastal multi-use path on the western side runs near San Miguel.

The Transversal de Cozumel is the 14 km road that runs between the west and east sides of the island. It has a good shoulder for most of the way, but it is interior and not as interesting for running.

Coastal town on the Riviera Maya. Best running options are the pedestrian path along the Quinta Avenida,... more...