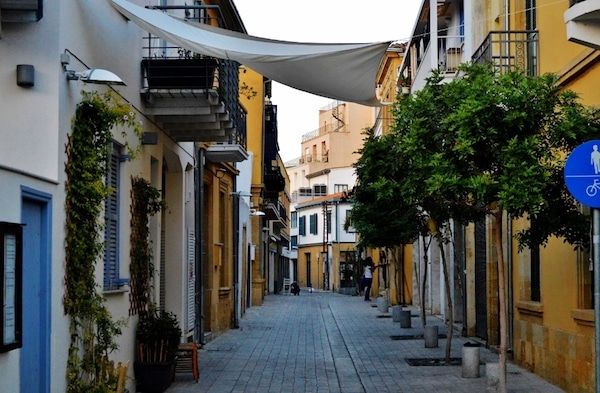 Located near the center of the island, Nicosia is largest city and of Cyprus. Even though it’s not on the coast, Nicosia attracts a fair number of visitors, especially the Old City, which is surrounded by some three km of (somewhat crumbling) Venetian Walls. Given the older, narrow streets of Nicosia, especially within the old city, it is difficult to proscribe a specific running route. But here are some suggestions:

Old City. Create your own route through the old city’s narrow streets and alleys. The southern half of the city is in Cyprus, while you’ll have to cross the border to access northern Nicosia/North Cyprus, using Ledra St. There are three entry gates to the Old City, which is ~1.5 km south-north or east-west. See the map below for some of the main sites of the Old City. Make sure to incorporate Ledra St. and Onasagorou St.– two main commercial streets, as well as Faneromeni Square and Archbishop Kyprianos Square, into your Old City Route. At the intersection of Ledra St. and Onasagorou St. is Eleftheria (Freedom) Square, which connects the Old City and the New City. The wider Stasikratous St. Themistokli Dervi Ave. and Makarios Ave. run off of Eleftheria Square and while busy, are wider, prestigious shopping streets and are decent for running. Best to go early!

New City Center. Relatively narrow strip that stretches for nearly 2 km between Podocataro Bastion in the east to the Cypress Museum in the west. Use Stasinou to run by the Leventis Art Museum and the American College just outside the Old City Wall.

Parks. Near the Famagusta Gate just outside the eastern end of the Old City, is a park that runs for ~1 km north-south, and includes a festival venue and the Statue of Liberty. Just south, next to the University of Cyprus, is Alsos Forest, a municipal park with a couple of km of lovely pedestrian paths (and some shade!). Agios Dimitrios Park, which is ~2 km southwest of the Leventis Art Museum, also has a combination of narrow pathways that lead into open spaces and is a green and relatively shaded running oasis.

An 8 km out and back along the 'Salt Lake Hiking Trail', a very runnable path along... more...