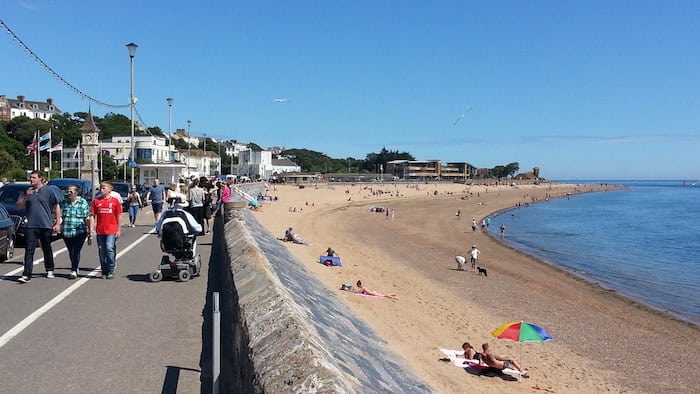 Exmouth is a port town on the east bank of the mouth of the River Exe, and the fifth most populous settlement in Devon. There are two great options for running in Exmouth, which can be combined: a promenade along the water and around the marina, and a cycle path to Budleigh.

Waterfront Run. There’s a waterfront path that spans for 3.7 miles, showcasing the mouth of the River Exe as it flows into the English Channel. Starting just north of the Train Station at King George’s Field and run south, doing a tour of the Imperial Recreation Ground and the marina, with views to the River Exe. At the Ferry Terminal (2-mile mark), head east on the Esplanade, a paved waterfront promenade along Exmouth Beach, with nice Channel Views. This section goes for 1.7 miles to a car park near Orcombe Point, passing the Exmouth Pavillion, Flagpole, and The Maer Nature Preserve (additional paths here).

Beach Run. Exmouth Beach is also quite decent for running. Even better is Sandy Bay Beach, just east of Orcombe Point. This wide, sandy beach has good firm sand and goes for ~1 mile.

Bike Path to Budleigh. This is a lovely off-road option on a gravel multi-use path that goes for 3.5 miles east to Budleigh. Built on a former rail bed, the path is nearly all off-road. There are woods, fields, and some beach views. The Exmouth end is at Phear Park, and the east end is just north of Knowle Village at Pooh Cottage Holiday Park.