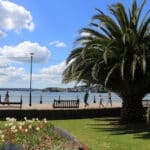 Paigngton is a seaside town on the coast of Tor Bay, part of what’s referred to as the English Riviera, including Torquay and Brixham. There’s some terrific running in Paigngton, featuring several small parks and a lovely a lovely seaside path that goes for ~6 miles from Goodrington Beach north to Torquay,     Fun option: can run one-way and take the train between Torquay, Paignton, Goodrington.

Waterfront Path. A lovely waterfront path runs between Goodrington Beach and Torquay. In the Paignton area, the path is the Eastern Esplanade/Marina Parade, and in other sections is part of the South West Coast Path. From Paington Pier, the path extends for 2 miles south, around Roundham Head to the end of Goodrington Beach, and north for 4 miles to Torquay.  There are nice water views on the mainly dedicated waterfront path, Note: there’s an 0.7 mile on-road section away from the water between Hollicombe Beach and Cliff Rd., just south of Livermead Sands Beach).

Add-Ons: In Torquay, there are lovely wooden boardwalks around the Marina, including the waterfront Princess Gardens.