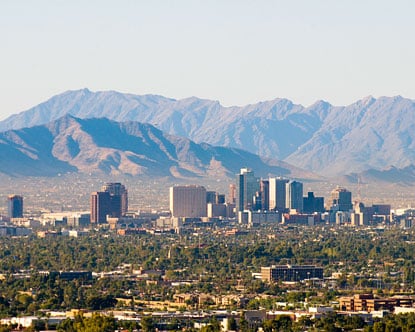 Downtown Phoenix is not much for running. But if you’re staying downtown and pressed for time, there are a couple of options. Central City, only 4 miles from the airport, is bound by I-10 & I-17. A good “tour of downtown” would run mainly west of 7th St., toward the State Capitol, using Van Buren, Monroe, or Adams. Sites include Heritage Square, Arizona Science Center Children’s Museum, Convention Center, Chase Field (baseball), Herberger Theater for Performing Arts, the Orpheum Theater, basketball arena, a couple of parks, and the Capitol. There are lots of hotels in this area too. Other areas/streets within downtown for running include **.

The best bet for a longer-distance, green, off-road run in Scottsdale. Multi-use path passes through an oasis... more...