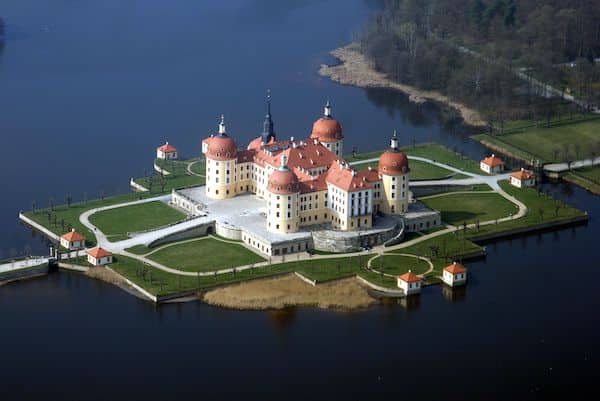 It’s worth the 1/2 hour drive or 45-minute bus ride to run the spectacular, park-like grounds of the Schloss Moritzburg (Moritzburg Castle). This is a classic European castle, surrounded by a lake and beautifully landscaped grounds with allés type paths. One could do a route of 10k+ here. The castle itself is known for its vast trophy collection and parkland. Note: admission fee and restricted hours for palace, though grounds might be free.

Start near the bus stop and begin with a 5 km loop of the lake on a paved, multi-use path. Then, head north to the castle, located on a small island, and then onto the manicured paths of the castle grounds (Schlosspark). Continue north, enjoying the paths of Mittelteichbad park overlooking the lake. Continue on paths along the Frauenteich lake to an observation path, then head back south along the castle paths with the Hellhaus at the center, ending with a path along the canal.