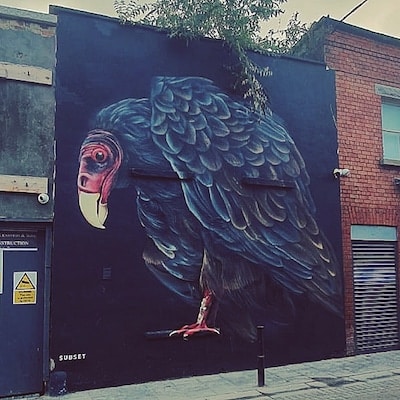 is is another ‘runseeing’ tour of Dublin, with an emphasis on the city’s famed street art in the Portobello, Liberties, and Smithfield areas. The route was designed by Nick Alexander, who also leads this as a guided tour. Run in the footsteps of Irish history, where art pieces are often around the corner from iconic cathedrals or the Castle.

Start at Fusilier’s Arch, at the northwest corner of St. Stephens Green opposite the shopping arcade and the world-famous Grafton Street. Head south on Harcourt St. toward the water, and then run along the Charlemont Mall. This next section is the Portobello area in the south city center, known for its street art. Run west on Harrington, and then along Camden St., famous for shopping. The next section is up Patrick St. to St. Patrick’s Park and the River Liffey, crossing the river to do a loop around Smithfield, another area of street art known for its public square, St. Michan’s Church and the Distillery. Come back by Four Courts, crossing back over the River. The final 3k is through Temple Bar, using Essex St. and College Green to pass by City Hall, the Molly Malone Statue, Trinity College, and Parliament Sq.

The main areas of street art are in Portobello (just west of St. Stephen’s Green), Liberties, and Smithfield (the area around the Distillery).