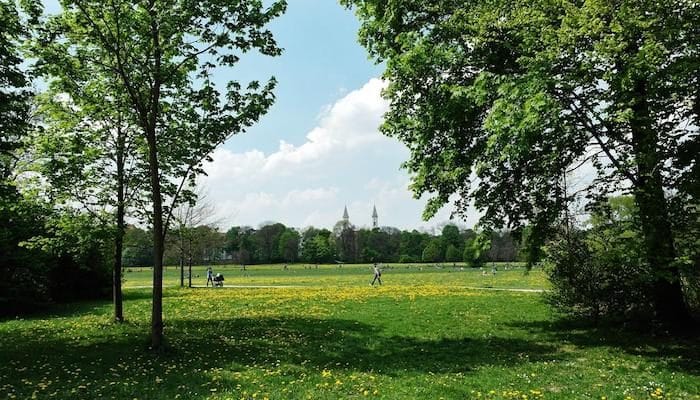 The Englischer Garten is the centerpiece of running in central Munich. The grand, 18th century park features nearly 80 km of trails through woods, around a lake, and along the Eisbach and Isar rivers (the river paths are fairly wooded).  There are numerous running options here: paved and gravel paths past fields and meadows, more wooded interior trails, and some waterside sections. Scenic highlights include the Haus der Kunst contemporary museum, Bavarian National Museum, the Eisbachwelle continuous wave along the Eisbach River, and the Monopteros.

It’s difficult to map out a precise running route, since there are so many paths and options. The park is long rather than wide, up to ~6 km north-south. A good 4-mile (6.5 km) loop is the southern section, starting at the impressive Odeonplatz square, and doing the main paths up to 2R ring road. One can continue further north for another 2-3 km in a more natural setting. For a post-run treat, enjoy a swim in the river or a cold one at one of the lakeside beer gardens.