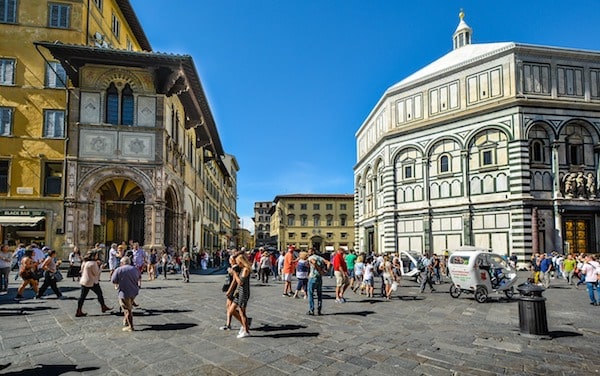 While just about any run in Florence can be described as a ‘sightseeing’ tour, our ‘runseeing tour of Florence features the historic center and the city’s main sights. We strongly recommend doing this run early — after 8am you might fighting with crowds to just walk. We try to make as few turns as possible, but labyrinthine streets make that a challenge…Use this guide as an outline and improvise your own route.

Longer, 10k option. Start at the Piazza del Duomo, and run by the Chiesa di Santa Maria Maggiore. RIGHT on Via Conti and run by the impressive Medici complex. RIGHT on Via Sant’Antonino, to degli Arazzieri, doing a little loop around Piazza san Marco. Then right on Via Ricasoli, heading toward the river, passing the Academia and the Duomo, using the Via del Proconsolo, over an old city wall, passing by the impressive Bargello museum. Note the Galileo Museum’s sundial as you approach the river. Here, the longer run heads up to the Piazzale Michelangelo (see that route for more details) by heading east on the river, crossing Ponte alle Grazie, for 1 km to Ponte S. Niccolò. Do a loop up to the Piazalle, using Viale Michelangiolo up and Viale Giuseppe Poggi (and stairs) down, admiring the great views from top. Once back down, LEFT on Via di Belvedere for 1 km, then RIGHT on Costa S. Giorgio the enjoy a little tour around the Belvedere, a 1500 hilltop fortress, and the public Boboli Gardens, and the Giardino Bardini, a restored 17th century villa, now a museum with gardens. For the final section, LEFT on Via de’ Guicciardini, running by the Palazzo Guicciardini and the Pitti Palace and piazza. Then turn RIGHT toward the river and cross over the Ponte Santa Trinita, running by the Ferragamo Museum, the Church of the Holy Trinity, and the Minerbetti Palace. (Note: The Boboli Gardens are wonderful for running, great place to do some hills if you go early before they get too crowded. Open 8:15am)

Shorter Option. Save 3.5 km by eliminating the Piazzale Michelangelo. At the San Niccolo gate, get onto Via di Belvedere and join the route from there.

Do it Yourself Option. If you get up early and would prefer to create your own route in the center, here are some key streets/sights to run (from Wikipedia):  Via Camillo Cavour, one of the main roads of the northern area of the historic centre; the Via Ghibellina, one of central Florence’s longest streets; the Via dei Calzaiuoli, one of the most central streets of the historic centre which links Piazza del Duomo to Piazza della Signoria, winding parallel to via Roma and Piazza della Repubblica; the Via de’ Tornabuoni, a luxurious street in the city centre that goes from Antinori square to ponte Santa Trinita, across Piazza Santa Trinita, characterised by the presence of fashion boutiques; Via Roma, Via degli Speziali, Via de’ Cerretani, and the Viale dei Colli.