No Thanks
Frankfurt, Germany 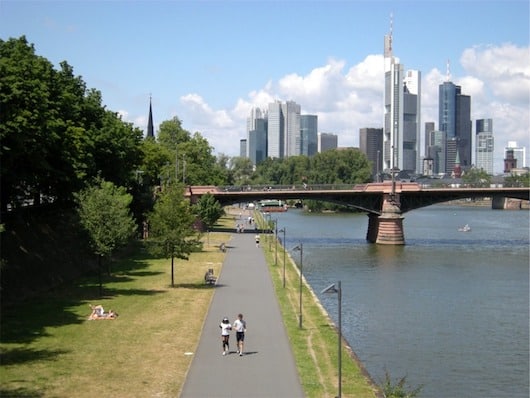 The paths along the Main River are among the best places to run in Frankfurt. The Main is the longest right tributary of the Rhine, with the older part of the city (Altstadt) on the north bank, and the ‘Museum Embankment’ highlighting the south bank. We’ve mapped a central 8 km loop, plus additional options. There are some 10 bridges (brücke) that can be crossed between Highway 661 (Kaiserleibrücke) and Highway 5 (Europabrücke).

Central Loop. 8.2 km. Start from the centrally located Park Nizza on the north bank. It’s about 1.5 km east to end of the small island just past the Wethafen Tower. Retrace your steps, crossing the Friedensbrücke to the south side. Run about 3 km east to the Deutschherrnbrücke pedestrian bridge, over to Hafenpark (you can go another 1.5 km further east along the paths). This southern section is along the green ‘Museum Embankment‘, consisting of several important museums and interesting buildings. Then loop back to the start, passing by the Äquatorialsonnenuhr sculpture, and the Altstadt (old city). There are several bridges to vary the route length, including the Eiserner Steg (‘love locks’), and one going over to the Museumsufer. Nice water views a good part of the way!

Longer Options: From Friedensbrücke, head west on the south bank for another 2 km to Mainblick, a scenic spot in a park on a small island. From Hafenpark, you can go another 1.5 km further east along the paths. Combining these two add-ons would double the route to 14k!

A series of park lands around the former city walls, making for a nearly 5 km green... more...