No Thanks
Freiburg im Breisgau, Germany 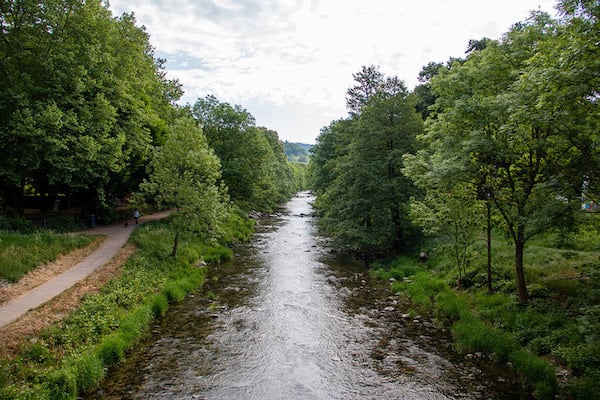 One of the better spots for a longer off-road run is the series of  paths along the Dreisam River. Overall, there are ~8.5 km of mainly paved paths along the south side of the river. From the Schwabentorbrücke bridge, which provides good connections to the city centre and Altstadt (historic centre), we’ve mapped two routes, that can be combined.

Western Route. It’s 5.5 km west to the Lehener Brücke. The path runs alongside the main 31a highway, but there’s a tree buffer much of the way and there are water views.

Eastern Route. It’s 2 km to the Sportwissenschaft sports complex, and then another 1 km to the Dreisamstadion. It’s a pleasant run on a cycle path and roadside sidewalk, with some nice water views. At Sportwissenschaft, there are fields and two running tracks!

Spur Option: Near the 3 km mark of the western route, there’s a path that branches off, headed south through the Dietenbachpark area, and the small lake. It’s also ~1 km north to the Seepark, using the Hermann-Zens-Brücke (bridge) and the cycle path.

One of the most scenic spots for a run in Freiburg. Nice network of forested paths around... more...