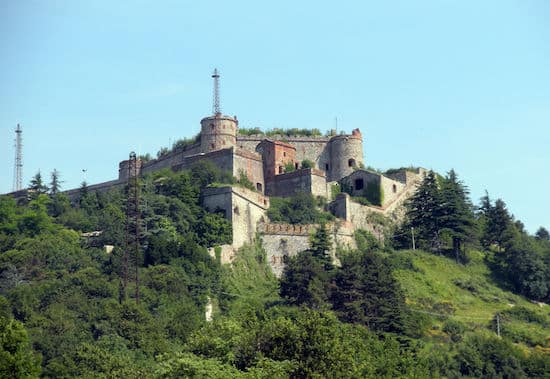 A series of walls was built in the 17th century to defend Genoa. The “Parco delle Mura” is now a protected area, set on a hillside between the Bisagno and Polcevera valleys. It’s a wonderful spot for a hilly run, with pretty roads or paths between several forts, through pastures, meadows, and woods, with great views. Best of all, one can do a one-way between two funiculars.

Loop Option: Between the Funiculars: Start at the Zecca-Righi funicular and take the 6-minute ride the top (Righi). From there, follow the V. delle Baracche or the V. del Peralto up the hill to the Forte Castellaccio and then further to the Forte Sperone. This is a steep uphill walk/run, climbing 180m over 1.5 km!  Now that the hardest part is done, you get to cruise downhill, along the Via Al Forte di Begato (or path alongside), which has views overlooking the Polcevera Valley, passing Forte Begato, and the Porta di Granarolo, to arrive at Granarolo funicular station, which you take down to Principe. (Bring money!)

Alternatives/One-Way Option: For more forts, continue from Forte Sperone to Forte Diamante, passing Forte Puin and Forte Fratello Minore. It’s 3 km, with 140m gain over not as steep terrain. Then, run downhill to the Trenasco FGC (Train) station, and take it down to Genoa-Brignole (note: train runs only every couple of hours – obtain schedule!). Alternatively, take the train from Genoa-Brignole to Trenasco, and run down from Forte Diamante to either the Righi OR Granarolo funicular stops. This way you can do a mainly downhill run.

Note the road is narrow, with no shoulder. There are numerous paved and gravel paths, near the road, but might not pass the forts directly. Very pretty trail running!