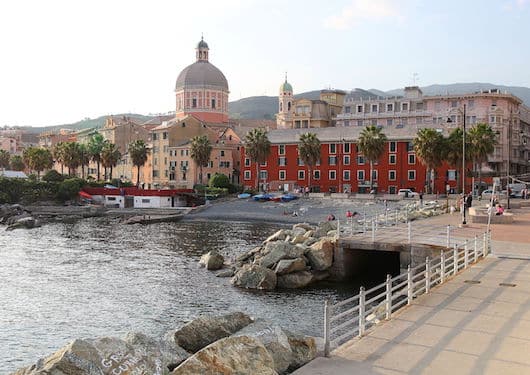 Pegli is a coastal town 12 km west of Genoa and worth a visit. We’ve put together a 6 km ‘runseeing tour’ of Pegli’s highlights, including two signature Villas, parks, and a nice promenade along the water.

Start at the waterfront path (Lungomare di Pegli), opposite Piazza Porticciolo. Head east along the water path for 1 km, including a jaunt down the ferry pier. Turn around at the Arena Park, and then RIGHT on the Viale Durazzo Pallavicini, away from the water on this lovely, tree-lined street that goes for 0.5 km the Villa of the same name. Do a loop around the Villa Park, and then around the Naval Museum and through the Piazza Cristoforo Bonavino to the Park Giardino di Villa Centurione Doria. Next, take V. Amerigo Vespucci back toward the water, then RIGHT along Via Martiri della Libertà. Now you’ll do a loop around a lovely park using two gravel paths: Via Melinotto heading north for 0.6 km, then curling back along Salita Superiore Rapalli, which ends at the SS1 on the water. Return along the waterfront path.