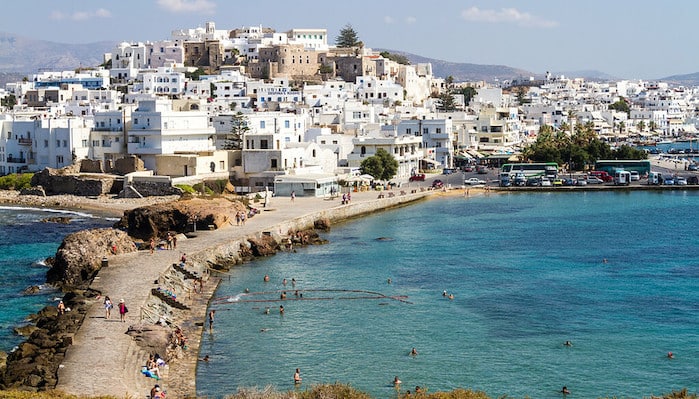 The island of Naxos is known for its beaches, hiking trails, and beautiful Cycladic villages where influences of Byzantine architecture still remain. There is some wonderful coastal running on Naxos, including the waterfront of the main city of Chora and some great beaches for running on the southwest coast. We’ve also mapped several routes on Naxos’ attractive interior farm roads and some detailed walk/hike/trail runs through the island’s interior villages, featuring historic churches, temples. and ancient ruins.

Chora (Naxos Town). The village of Chora, known alternatively as Naxos Town or Old Town, is the principal destination on the island of Naxos. As the major ferry port, it boasts a nice touristic waterfront that brings a modern edge to the still-standing historic temples and castles. The network of narrow criss-crossed streets downtown is not particularly good for running (unless very early in the morning!), but there are a few runnable options.

The best choice for running in Chora is the promenade along the Naxos Town Waterfront, which stretches about 1 km from the ferry terminal to Agios Georgios Beach. One can continue along the beach for an additional 1 km to the south, or continue up to the Apollo Temple for an additional .5 km to the north. On the return trip, pass through the Protopapadaki, a lovely strip of shops and restaurants (Just be aware it gets crowded during peak hours). ROUTE MAP.

Longer Option: Those seeking a longer run departing from Naxos Town can set out on the Andrea Papandreou Road heading south. The end of the street closest to town has sidewalks, and while the rest of the shoulder isn’t spacious by any means, traffic stays pretty light. Runners can follow the road for about 2 km to the airport intersection, then turn RIGHT onto the Stelida Road. Follow this road another 2.3 km into Stelida, turn RIGHT at the end, then immediately LEFT to reach Agios Prokopios Beach. Here, runners can either turn back for a 10 km, or continue along the Agios Prokopios beach or Naxos Beaches route. Add on a quick trip out the Stelida/Agios Prokopios peninsula (just north of the beach) for some killer views of Paros. ROUTE MAP.

Naxos Beaches. One of the most scenic stretches of Naxos island is the south western shoreline, which is home to many of the island’s best beaches. In general, most Naxos beaches are good for running, though some have sand that can be soft and prone to steep drop offs at the waterline. The best beaches for running are Agios Prokopios Beach (1 km) and the stretch between Agia Anna and Plaka (4 km), but keep in mind they get crowded in peak season. For a longer route, runners can enjoy the coast with a 5 km (one way) Tour of the Naxos Beaches. It starts on the paved road of Agios Prokopios Beach, then turns to hard packed dirt, passing Agia Anna Beach and Marakas Beach before arriving at Plaka (Orkos) Beach. ROUTE MAP.

Mikri Vigla. We’ve mapped a 4.5 km loop of this charming beach community, home to laid back resorts, pristine sands, and cedar tree forests. Start with ~3 km along the runnable north and south beaches, and then loop back along the (unnamed) dirt roads leading out the cape, through village farmland. Longer Option: Extended along the coast or connect to our Naxos Beaches Route. ROUTE MAP.

Byzantine Churches (Tragea). This scenic loop through some of Naxos’ most beautiful inner villages is one of the most popular easy hiking options on the island. While there are a few slightly technical sections, most of the 8 km route is good for trail running. Starting from the village of Chalki (Halki), you’ll wind past several stone Byzantine churches to Moni. Another path leading south from Moni hits a few more churches, then closes the loop. ROUTE MAP. TRAIL INFO.

Kouros and Villages Trail. Another signature easy hike/trail run on Naxos is the trail to the “Kouroi” – massive unfinished marble statues dating back to Ancient Greece. The trail also winds through some gorgeous and typical Naxos villages, including Melanes and Myli. It mostly utilizes dirt roads and some cool marble paths, though there are some sections of single-track mixed in. We’ve mapped an ~8 km loop, but Earth Trekkers has a good guide to most of the trail. ROUTE MAP.

Temple of Demeter. The Temple of Demeter is one of a few impressive ancient temple ruins scattered across the island of Naxos, but the volume of scenic farm roads surrounding this area makes it a great running destination. We’ve mapped a route starting from Chalki, winding west through Kanakari and Ano Sagkri, then diving south to the trail around the temple. It’s about 16 km out and back. ROUTE MAP. TRAIL INFO.

In Paros, the best place to run in a waterfront tour of Parikia Bay. In Antiparos, there's... more...

The Greek Islands are a collection of 6, 000 land masses scattered across the European coast of... more...