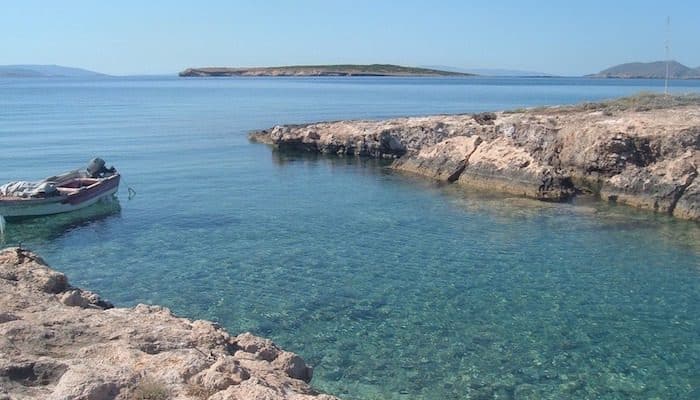 The Cyclades island of Paros combines stellar beaches with a fun nightlife and the thrill of watersports in its coastal villages. The highlights of running in Paros are along the waterfront path of Parikia Bay, and along the bayfront of the small neighboring island of Antiparos. 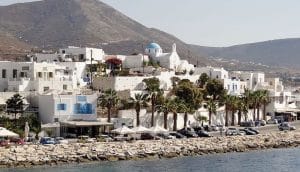 Parikia Bay, Paros.  The port city of Paros is the first and only city most tourists visit, but luckily for runners, there is a great route option right along the Parikia Bay. It’s not particularly long, but the 1.6 km stone paved path along the beach is a great choice for waterfront running. Runners can pick up the path on the south end near the playground and follow it north to Ephessus Restaurant. From here, the path ends, but runners can continue further north along the road to the west end of Livadia Beach. Note: Be aware of traffic in this section, as there is no shoulder. There are also some great paths heading inland from the waterfront. Use them to sightsee the Frankish Castle, the Panagia Ekatontapiliani church, and varied cafes of Parikia. Depending on the precise route taken, an out and back is up to 5 km. MAP. 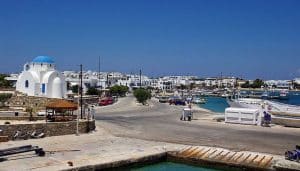 Antiparos: One of the best running options from Paros is to take a ferry to Antiparos, a paradise of car-free paths. On the east coast of the island, the 1 km waterfront path from the Chapel of Saint Marina to George’s Grill is a nice run, with extensions on either end. To the north, a gravel road reaches west towards Agios Spyridonos Beach, while to the south, a more primitive trail leads to First Psaralyki Beach.

There is also some nice waterfront running on the west coast of the island, along the path bordering Sifneikos Beach. Views are particularly great to the north of the beach where the ~1 km path turns into dirt.

Runners can combine both waterfronts with the pedestrian friendly inland streets of “downtown” Antiparos. Start at the Chapel of Saint Marina (the blue and white dome just across from the Antiparos-Pounta ferry), go north along the water, then turn LEFT up the main street. Pass a number of cafes and the shopping mall, and continue to the Church of St. Nicholas. Wrap around to the south side of the church and continue straight out the road to Sifneikos Beach.

This coast-to-coast option offers about 3 km of running round trip, with the easy opportunity to add distance along the waterfront on both ends. MAP.