No Thanks
Guangzhou, China 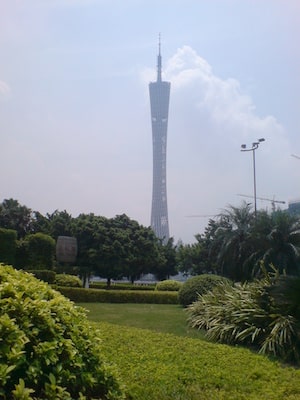 Another favorite run in central Guangzhou is a loop around Ersha Island, which sits between the north and south banks of the Pearl River. The island itself is fairly pastoral (for Guangzhou), with a couple of parks, a concert hall, and an art museum. It’s ~5 km around the island’s parks and riverfront paths. A favorite 10k loop is to start at the grand Huacheng Square, run through this grand plaza with its great skyline views, and then do a loop of Ersha Island. Just east of Huacheng Square is Zhuijiang Park, which is a nice, green oasis (~2 km park loop).

The easiest way to connect to Ersha Island by foot is via the small bridges through Haixinsha Island. From the south bank of the Pearl River, there are quick ferries to get to Ersha Island, or transit to Haixinsha station.

Longer Run/Add-Ons: Many options to combine Ersha Island with the multi-use paths along the north and south banks of the Pearl River. To continue west from Ersha Island, use Datong Rd., to Lin Zexu Memorial Park, where you can run west to Shamian Park. Or, run east of Ersha Island along Linjiang Avenue to the Panzhou Bridge (~5 km). See our Pearl River routes for information.

One of the best running options in Guangzhou. There are multi-use paths on both the north and... more...

A nice oasis in the Tianhe District. Tianhe Park features paths around a lake, a small forest,... more...