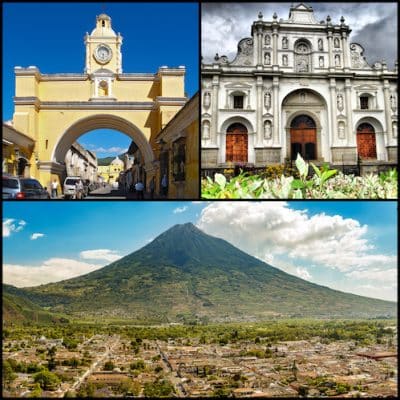 It’s a special experience to create your own run on the streets of Antigua Guatemala, the city in the central highlands of Guatemala known for its preserved Spanish Baroque-influenced architecture and ruins of colonial churches. Located 30 km from Guatemala City and accessible by bus, this UNESCO World Heritage site is surrounded by three enormous volcanoes and mountains, plains and hills.

The most ‘runnable’ run in Antigua is to do a tour of the largely pedestrianized old town. It’s laid out in an easy to follow square pattern, so easy to follow! This is also the only way to do a relatively flat run in the area. Just outside of town, things get hilly and rugged really quickly!  Start in Central Park (Plaza Mayor) and explore the streets north-south, ~1 km between C. de Las Animas 3 & 9 Calle Oriente, and ~1 km east-west between 1a Avenida Nte & Alameda de Santa Lucia. Notes: the streets have a mainly cobblestone surface. Also, runners should be aware of Antigua’s elevation at 5,000 feet.

Additionally, you can run to the Hill of the Cross (Cerro de La Cruz), which offers great views of the city and the Volcan Agua. This will get the heart rate up! From Plaza Mayor, it’s 1.6 km, climbing 121m. Use 1a Avenida Nte to head north, then left at the park to get to the Cross.

Hill/Trail Running Outside of Town. Once outside central Antigua, things get rugged and hilly very quickly. There’s a good network of hiking trails just outside of town that are terrific for trail running. Southeast of town, check out the Carmona Trails, and the the Finca El Pilar. In the shadow of Volcan Agua (11.500 foot summit reachable by hike), there are trails in the Finca La Soledad, Alotenango Sacatepéquez & Cafetalera las Marías hiking areas.

Share:
Essentials
Route Map: To Hill of the Cross