No Thanks
Gulf Shores, Alabama 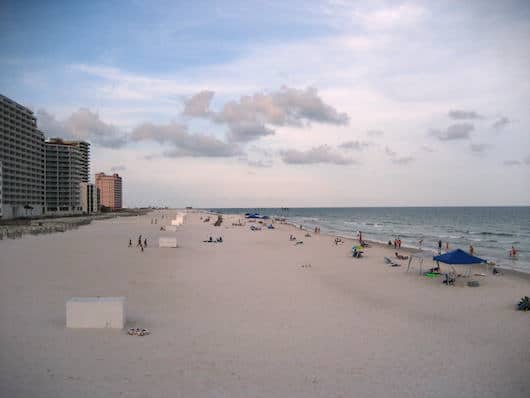 There are miles and miles of beach in the Gulf Shores area. The beaches even run east into nearby communities such as Orange Beach, Perdido Key, and the Pensacola (FL) area. They are generally wide, fairly unspoiled, and feature soft-ish sand. Runners can find firm sand near the water and depending on tides. It’s 30 miles from the the break between Orange Beach/Perdido Beach, west to Fort Morgan. From the break east, along Perdido Beach to the end (becoming increasingly remote, it’s about 15 miles of continuous beach. A few comments about each major beach area:

Orange Beach. About 8 miles of beach from break between Orange Beach/Perdido Beach west to Gulf Shores Beach (intersection of SR 59).

Gulf Shores Beach. The beach heads west for ~22 miles from SR 59 to Fort Morgan. It’s 6.5 miles to the end of RT. 182, then you can continue west along the beach for another 15.5 miles, as it becomes increasingly remote. RT. 182 has a decent shoulder and occasional water views, but isn’t that attractive for running.

Perdido Beach. Officially located over the state line in Florida, this beach is on a barrier island, and is more undeveloped than the beaches in Gulf Shores. From the intersection of Rt. 292, it’s 3.5 miles west to the end of Perdido State Park, and 7.5 miles to the break with Orange Beach. From the Rt. 292 intersection, it’s 1 mile north along Perdido Key Dr. (Rt. 292) to Canal Dr. and the trails of Big Lagoon State Park. Can also continue along the barrier beach from Rt. 292 east for along the beach in Johnson Beach National Seashore.